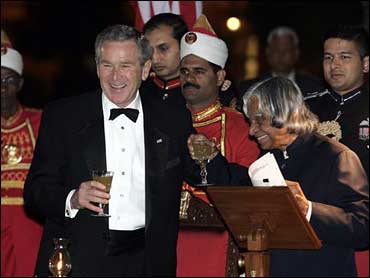 On his first trip to India, President Bush and his Indian counterpart agreed Thursday on a landmark nuclear energy agreement that deepens ties between the world's oldest and largest democracies.

Mr. Bush acknowledged it will be difficult to persuade Congress to support the agreement, in which the United States would share its nuclear know-how and fuel with India. But he said he's confident it will be approved so India can power its fast-growing economy without expanding world demand for oil.

Under the terms of the agreement, India will open 14 of its 22 nuclear reactors to international inspection, as well as all future reactors, reports CBS News senior White House correspondent Bill Plante. This deal does nothing to stop the growth of India's nuclear weapons program, but U.S. officials are betting that India's growing demand for electric power will mean a lot of nuclear reactors and billions of dollars in business for U.S. companies if Congress is willing to change the laws.

Critics in Congress say the White House is making an exception for India, which has refused to sign the Nuclear Nonproliferation Treaty.

"Proliferation is certainly a concern and a part of our discussions, and we've got a good-faith gesture by the Indian government that I'll be able to take to the Congress," Mr. Bush said.

"But the other thing that our Congress has got to understand is that it's in our economic interests that India have a civilian nuclear power industry to help take the pressure off the global demand for energy," the president said. "To the extent that we can reduce demand for fossil fuels, it will help the American consumer."

A top U.S. official says the deal's not perfect, but that India has a powerful incentive to join the international nuclear mainstream: it badly needs more energy for its booming economy. And with coal too dirty and oil too unstable, India thinks American nuclear technology is the answer, CBS News chief White House correspondent Jim Axelrod reports.

The agreement was a political coup, too, for Indian Prime Minister Manmohan Singh. "We made history," he said, standing alongside Bush in a sunwashed courtyard.

Mr. Bush mourned the loss of life in a suicide bombing Thursday in Karachi, Pakistan, that ripped through the parking lot of the Marriott Hotel and broke windows in the nearby U.S. consulate. At least four people died, including a U.S. foreign service officer. The attack occurred hundreds of miles from Islamabad, where Mr. Bush was headed later this week.

"Terrorists and killers are not going to prevent me from going to Pakistan," Mr. Bush said.

For a second day, thousands of demonstrators gathered in New Delhi to protest Mr. Bush's visit. Dozens of politicians, mainly from leftist parties, stood on the steps of the country's national parliament building chanting "Bush go back!" and "Down with Bush!"

"We're saying this because he is the biggest killer of humanity in the 21st century. He has killed in Afghanistan, he has killed Iraqis and now he is bent on killing Iranians," said Hannan Mollah, a lawmaker from the Communist Party of India (Marxist). "The Indian government should not get into any deal with the Americans. Bush has laid a trap for India."

They announced new bilateral cooperation on an array of issues from investment to trade, health to the environment, agriculture to technology, and even mangoes. Mr. Bush agreed to resume imports of the juicy, large-pitted fruit after a ban of nearly two decades.

But the civilian nuclear agreement is the major building block of renewed relations between the United States and India, which is seeking greater recognition on the world stage.

Critics say the United States is using India as a counterweight to China's growing economic and political influence, and argue that the agreement sends the wrong signal to North Korea and Iran, which have rejected calls for international monitoring of their weapons programs.

Mr. Bush disagreed. "What this agreement says is things change, times change — that leadership can make a difference," he said.

"I'm trying to think differently, and not stay stuck in the past."

In Washington, there was some quick criticism of the president's nuclear deal, CBS News correspondent Bob Fuss reports.

Rep. Ed Markey, D-Mass., called the agreement a "disaster" and said it undercuts U.S. efforts to convince other countries without nuclear weapons not to build them.

"With one simple move the president has blown a hole in the nuclear rules that the entire world has been playing by," said Markey, co-chairman of the Bipartisan Task Force on Nonproliferation and the top Democrat on the House Energy and Commerce Committee.

John Bolton, the U.S. ambassador to the United Nations, defended the agreement.

"India and Pakistan had never signed the Non-Proliferation Treaty and therefore they weren't in violation of it by having nuclear programs," Bolton said in New York.

The agreement marks a major shift in policy for the United States, which imposed temporary sanctions on India in 1998 after it conducted nuclear weapons tests. India insists it has been a good steward of nuclear material for decades; that there has never been one incident of proliferation from it.

Singh's leftist allies criticized the pact, saying it paves the way for U.S. meddling in Indian affairs. "Today is one of the most shameful days in the history of independent India," said Shambhu Shrivastava, spokesman for the socialist Samata Party.

The late night negotiations for the nuclear pact, coupled with protests throughout Mr. Bush's stay, reflected India's mixed feelings about the visit by the leader of the United States — a country seen as a loyal friend by some and a global bully by others.

Many business and government leaders are eager to strengthen ties with the United States.

Mr. Bush repeated his position that reforms at the United Nations are needed before the U.S. will consider backing India's desire to become a permanent member of the Security Council.

Mr. Bush's day included a visit to the site where M.K. Gandhi, India's independence leader, was cremated in 1948. It ended at a state dinner with Indian President A.P.J. Abdul Kalam under a crescent moon in a lush courtyard at the presidential palace. Waiters in red tunics and red-and-white turbans scurried about after toasts of mango juice by the two heads of state.