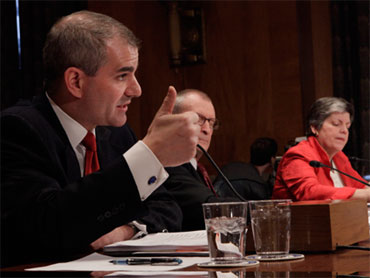 President Bush is trying to build international pressure on North Korea to return to high-stakes nuclear talks at the same time he reassures Asian leaders about the tough U.S. approach.

Mr. Bush, who arrived here Friday night, will talk on Saturday with the leaders of China, Japan, South Korea and Russia, his partners in negotiations to persuade North Korea to abandon its nuclear weapons program. After three rounds of inconclusive talks, North Korea refused to attend a scheduled fourth session in September, reportedly because it wanted to see who would win the U.S. presidential election.

Riot police used water cannons and tear gas Friday to break up a demonstration by hundreds of rock-throwing protesters before more than 20,000 people marched to vent their anger at Pacific Rim leaders, particularly Mr. Bush. While some protesters said they oppose the APEC summit, which they likened to a rich man's club that does nothing for the poor, much of the rage was aimed at Mr. Bush and the U.S.-led war in Iraq.

The North Korea discussions will take place on the sidelines of the annual 21-nation Asia-Pacific Economic Cooperation summit, a group whose far-flung membership ranges from Asia to New Zealand to the Americas. Thousands of demonstrators marched through downtown Santiago Friday in protest of the summit, the presence of Mr. Bush and the war in Iraq.

Trade and prosperity are the main goals of the Asia-Pacific economic summit that brings President Bush to South America this weekend. But Mr. Bush is looking to the 20 other leaders of APEC to do more to combat global terrorism and the spread of weapons of mass destruction, reports CBS News Correspondent Mark Knoller.

Specifically, he wants the summit to step up pressure on North Korea to end its pursuit of nuclear weapons.

"The big priorities will focus on the security and economic side because they really go hand in hand," said White House press secretary Scott McClellan. "You need to make sure you have security so that you can move forward on the economic side."

Iraq, once a dominant topic, has largely fallen off the Bush administration agenda.

But North Korea, an "axis of evil" brother of the former Iraqi regime, is high on the priority list. Of the seven foreign countries whose leaders Mr. Bush plans to meet with in private one-on-one sessions, four of them — China, Japan, South Korea and Russia — are U.S. partners in talks with North Korea aimed at making the Korean peninsula nuclear-free.

Three rounds of talks in Beijing have yielded little progress and Pyongyang refused to attend a fourth round slated for September. The White House hopes to use to the APEC gathering to map strategy to put another meeting on the calendar for early 2005, a senior White House official said.

Mr. Bush will lean especially on Chinese President Hu Jintao to persuade the fellow communist nation to return to the table, said another official.

Each year, the White House chooses allies on whom to lavish the most attention by scheduling separate meetings with the president. Canadian Prime Minister Paul Martin, whose predecessor, Jean Chretien, was openly snubbed last time for his lack of support for the U.S.-led invasion of Iraq, gets such a plum, as does Russian President Vladimir Putin, viewed warmly by the White House as a solid war-on-terror ally.

In other meetings with leaders of Indonesia, Mexico and even China, Mr. Bush could confront priorities conflicting with his own.

Indonesia, for example, is one of the countries pushing to return APEC to its traditional focus on trade, giving security a back seat. Newly elected Indonesian President Susilo Bambang Yudhoyono also plans to ask Mr. Bush to restore military ties, severed in 1999 over human rights concerns.

And Mexican President Vicente Fox will want to turn the conversation to reforming U.S. immigration laws. President Bush proposed giving work visas to undocumented workers, but he has done little to get Congress to go along, and his top goal in U.S.-Mexican relations after the Sept. 11, 2001 attacks remains enhanced border security.

Hu, meanwhile, comes to Santiago focused on establishing his country as a Pacific Rim economic and political powerhouse to rival the United States. Mr. Bush and Hu will meet just weeks after a top Chinese official accused the U.S. president of trying to "rule over the whole world" and destroying global anti-terror efforts with the Iraq war.

In the war on terror, Mr. Bush hopes to build on last year's pledges from regional leaders to intensify their crackdown on terror groups and curb the spread of unconventional weapons.

Freer trade will be a key focus of the president's meetings, as well.

He will use an official state visit with Chilean President Ricardo Lagos after the summit's close Sunday and a brief stopover in Colombia en route home to the United States on Monday to press his top policy goal for Latin America: a firm 2005 deadline to complete negotiations on a Western Hemisphere free trade agreement.

Brazil and Venezuela have led the resistance to such a pact, but Mr. Bush could find willing boosters in both the Chilean and Colombian leaders. The United States and Chile signed a bilateral free-trade pact last year. And Colombia is a major recipient of U.S. aid, which funds President Alvaro Uribe's war on leftist rebels and anti-drug efforts. Senior administration officials hinted before the trip of a possible increase in those funds.

Mostly, though, Latin America is on the back burner despite playing host to the meeting. Colombia is the only additional stop Mr. Bush is making in conjunction with the APEC summit; last year, when the meeting was in Thailand, he traveled widely through Asia.

With the U.S. reputation in Latin America damaged by the Iraq war and a perception of neglect, Mr. Bush was expected to arrive to thousands of anti-Bush and anti-globalization protesters in the streets of Santiago.