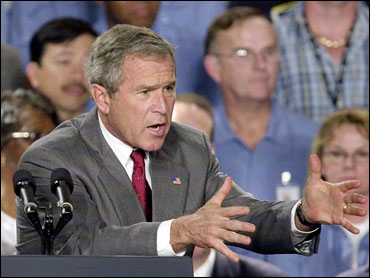 Unable to get Congress to endorse its plan to cut air pollution, the Bush administration is crafting a string of regulations that would accomplish the same ends.

Power plants would have to cut emissions sharply, but also be given flexibility — and more time — to do it.

The Environmental Protection Agency proposed new requirements Thursday calling on power plants in 30 states to reduce the amount of smog- and soot-forming chemicals they release from their smokestacks. It shortly will announce a rule to cut mercury emissions as well.

The level of pollution reductions, the timetable and the strategy for getting it done mirror closely proposals the administration offered Congress nearly two years ago in its so-called Clear Skies initiative. But that legislation has stalled with little indication of any movement.

Democrats, joined by some moderate Republicans, essentially have bottled up the Clear Skies bill in a dispute over whether to regulate carbon dioxide, a major "greenhouse" gas produced when burning fossil fuels and linked to global warming.

The Bush administration is strongly against regulating carbon emissions.

"The benefits will be very similar," Leavitt said in an interview Thursday, adding that the new rules also outline "many of the same strategies" as the Clear Skies initiative, which, he said, the administration nevertheless will continue to pursue.

The EPA's smog and soot regulation, as outlined Thursday, would require the sulfur dioxide emissions from power plants be cut from the current roughly 10 million tons a year to 3.2 million tons by 2015. Also, nitrogen oxide, a precursor to smog, would have to be reduced from a little more than 4 million tons annually to 1.7 million tons.

Like Clear Skies, the new regulations would provide states and utilities with a pollution trading system in which plants unable to meet the required reductions could buy emission allowances from other plants that have exceeded the required cuts.

The rules cover hundreds of power plants in 30 states — those that "significantly contribute" to ozone and soot pollution in primarily the eastern half of the country — from Florida to as far west as North Dakota.

A decision on whether to rate the Kansas City metro area, including Wyandotte and Johnson counties in Kansas, as a non-attainment area was deferred until next week because the EPA has just received this year's air quality control data for the region.

Josh Tapp, chief of air planning for the EPA's Region 7 — Missouri, Kansas, Nebraska and Iowa — said the state has until April 15, 2004, to respond to the EPA's new proposals.

If St. Louis and the surrounding counties were determined to be a non-attainment area, the state would have until 2007 to submit a plan to reduce ozone.

The regulations, which are designed to reduce long-distance, interstate pollution, will help states, especially in the Northeast; meet the more stringent federal health-based air quality standards that are being implemented.

Northeast states often have blamed pollution from coal-fired power plants in the South and Midwest for much of their dirty air. Such long-distance pollution would be reduced significantly under the proposal, officials said.

Leavitt, in an interview with The Associated Press, called the new requirements, which are expected to become final in a year, "the largest single investment in any clean air program in history" and predicted they will produce "the largest reduction in air pollution in more than a decade."

The regulations are part of a broader package, he said, that also will include for the first time controls on how much mercury, a substance that causes neurological problems, may be released from power plants. A proposal that would cut mercury emissions by 70 percent from 48 tons to 15 tons by 2018 will be proposed in the coming days, although the essential elements of it were leaked earlier this week.

Environmentalists, who have sharply criticized the Clear Skies proposal as a "rollback" of current clean air rules, complained Thursday that the new EPA regulations likewise fall short of what is needed.

"The reality is that what they are proposing will still allow industry to pollute too much for too long," said Frank O'Donnell, executive director of Clean Air Trust, an advocacy group. "And that will lead to continuing unnecessary health problems."

Michael Shore, an air policy specialist at the advocacy group Environmental Defense, said while he had no problems with the cap-and-trade approach to reduce smog-causing emissions and soot, the "reductions ought to be deeper than being proposed."

Environmentalists and health advocates have sharply criticized using pollution trading when trying to cut mercury emissions, arguing such an approach could lead to "hot spots" near plants where owners decide to buy credits instead of reducing the amount of mercury that is produced from burning fossil fuels.