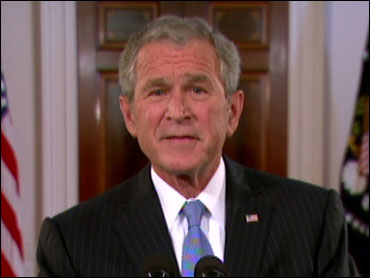 It was supposed to be President Bush's glory moment in his party's spotlight, full of tributes to his eight years of leadership and cheers from grateful partisans, as he passed the mantle to his would-be successor.

Instead, Mr. Bush's brief appearance Tuesday at the Republican National Convention in Minnesota was essentially a footnote. He got eight minutes via satellite hookup from a lonely White House podium 1,100 miles away. A Democrat-turned-independent, Sen. Joe Lieberman, got the showcase final speaking slot.

"I know the hard choices that fall solely to a president," Mr. Bush told delegates, his image beamed before delegates on giant video screens in the Xcel Energy Center. "John McCain's life has prepared him to make those choices. He is ready to lead this nation."
(Read the text and watch

the video
of Mr. Bush's speech)

Mr. Bush was well received, but it was not a rousing send-off for the man who, despite his unpopularity, somehow managed to keep Democrats confounded with his veto power and more often than not got his way.

Hurricane Gustav's landfall early Monday forced Mr. Bush to cancel plans for a splashy convention appearance on the opening night of the GOP convention. Despite dismal approval ratings that made a Bush appearance something of a distraction or even potential problem for McCain, all this was deemed Mr. Bush's due.

When McCain's team scaled back the convention lineup because of Gustav, they had a chance to scale back the president's role, too. And they took it.

Mr. Bush chose instead to reach back - to the campaign theme of national security that worked for his campaigns and those of other Republicans over the years.

"We live in a dangerous world," Mr. Bush said. "The man we need is John McCain."

Mr. Bush didn't mention his own record. Nor did he explicitly speak of McCain's Democratic opponent, Barack Obama.

Instead, the president put McCain's full-throated support of the Iraq war front and center in his pitch for the GOP senator to succeed him, and said that only McCain understands the lessons of the Sept. 11 attacks in a way that makes him qualified to be commander in chief.

The president referred to McCain as the "one senator above all" who backed the U.S. campaign in the Iraq war - and Bush's decision to send more U.S. troops into the fight - even as violence spiraled out of control.

Though a welcome message to partisan delegates, this only served to remind a skeptical broader public watching on TV about the war, and McCain's link to it.

Mr. Bush offered McCain's constancy in the face of doubts and criticism as a reason to support him. "That is the kind of courage and vision we need in our next commander in chief," the president said.

The president also emphasized McCain's impressive life story, as a former Vietnam prisoner of war and a politician with a maverick streak. Recounting McCain's tortuous time as a prisoner of war led Mr. Bush to the most partisan barb of his short speech.

"Fellow citizens," Mr. Bush said, "if the Hanoi Hilton could not break John McCain's resolve to do what is best for our country, you be sure the angry left never will."

Mr. Bush's remarks were bracketed by his decidedly more popular wife, Laura. She took the podium in the hall to introduce the president's address, and spoke afterward as well. She played defense for her husband's Oval Office record in the Oval Office, tossing out statistics on everything from education gains to fighting AIDS across the globe.

"You might call that change you can really believe in," the first lady said, a clear poke at Obama's campaign slogan.

Bush aides acknowledged the president would have preferred to take his turn in the convention limelight, while insisting he was pleased to do whatever he could. The execution of his appearance from afar was a bit awkward at times.

The crowd rose to its feet to applaud Laura Bush's introductory remarks just as the president - apparently unaware of the clamor in the hall - had started speaking on the screen. As a result, his opening words were drowned out. On several other occasions, as well, his words were lost when he continued talking over cheers in the hall.

"I wish he came here in person," said Colorado delegate Alan Duff. "You lose so much over the TV."

Still, Duff gave Mr. Bush high marks: "He knows what it takes to be president and he told us why John McCain's up to the job. You can't get a better recommendation than that."