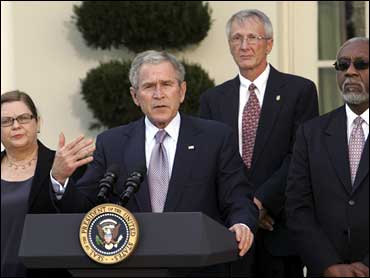 President Bush often jokingly tells mayors to fix the potholes. The message from a longtime pol: Keep constituents happy where it counts. On Tuesday it was Mr. Bush's turn, as the president of the United States focused an hour of his time on trash pickup and other pedestrian concerns. In Iraq.

The White House allowed one reporter, from The Associated Press, to sit in on a briefing for Mr. Bush by leaders of provincial reconstruction teams in Iraq. What Mr. Bush likes to call the "political surge" that goes along with the military surge he ordered a year ago, these teams are integrated units of U.S. civilian, military and diplomatic workers deployed across the country as mentors to help local Iraqis govern, boost their economies and restart basic services still missing in much of Iraq.

The situations the leaders reported ranged from the dire to the celebratory.

John Jones, the provisional reconstruction team leader in Diyala province northeast of Baghdad, gaped in awe at the report from another team leader, Angus Simmons. Simmons had talked about all the ways his team was helping boost tourism in the southern province of Najaf, home to holy sites, including assisting the Iraqis' dream of a new airport. It was a situation unimaginable to Jones in his area, which has become a messy new stronghold for extremists who have been pushed out of Anbar province by the increased U.S. troop presence there.

"We're still struggling," Jones said. "The key thing for us is we're making small steps." The biggest victory Jones reported was getting access from the provincial governor, a Shiite Muslim in a predominantly Sunni area.

The hourlong session involved three PRT leaders talking via secure videoconference from Iraq and three others ("on vacation" back in the States) in the Roosevelt Room. Those watching the giant screen with them and Mr. Bush included Vice President Dick Cheney, Secretary of State Condoleezza Rice and Adm. Mike Mullen, the chairman of the Joint Chiefs of Staff. Bush talked little, asking a few questions, making a couple of jokes and giving a brief pep talk.

Mr. Bush said in the Rose Garden afterward that the meeting, along with separate teleconferences Tuesday with Iraqi Prime Minister Nouri al-Maliki, Gen. David Petraeus, the top U.S. military commander in Iraq, and Ryan Crocker, the U.S. ambassador, gave him confidence that recent security gains are producing political successes, and will do so even more.

The president said that last year, particularly at the end, "has become incredibly successful beyond anybody's expectations."

Senate Majority Leader Harry Reid, D-Nev., and House Speaker Nancy Pelosi, D-Calif., took issue. "It is a failure of leadership when our president calls 2007 incredibly successful beyond anybody's expectations when the Iraqi government has done so little to achieve stability and it has been the most lethal year yet for American troops," they said in a statement.