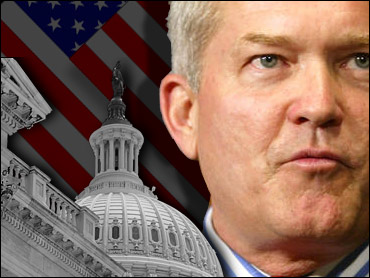 Mr. Bush's remarks at a White House news conference came as Peggy Sampson, supervisor of the page program, was questioned before the House ethics committee. The panel is not only investigating Foley's inappropriate and sometimes salacious electronic messages to former pages, but whether House officials covered up Foley's come-ons.

Sampson would not comment to reporters after the more than two-hour closed session. The unique page program allows high schoolers, sponsored by their congressman, to attend classes in the congressional page school and work for legislators as errand-runners.

Asked about the scandal, Mr. Bush said, "This is disgusting behavior when a member of Congress betrays the trust of the Congress and the family that sent a young page to serve." And he defended Hastert, who said he first learned of the approaches in late September.

"I think the speaker's strong statements have made it clear to not only the party ... but to the country that he wants to find out the facts," Mr. Bush said. "Denny is very credible as far as I'm concerned. He's done a fine job as speaker."

Foley sent e-mails and instant messages, some of them sexually explicit, to male pages after they left the program.

A four-member investigative panel of the evenly divided ethics panel is sorting out conflicts — including whether Hastert's office learned of the Florida Republican's inappropriate conduct in 2002, 2003 or 2005. All those years were mentioned, depending on who is telling the story.

Kirk Fordham, Foley's one-time chief of staff, is scheduled for questioning Thursday before a House ethics committee investigative panel. He said he notified Hastert chief of staff Scott Palmer in 2002 or 2003 about Foley's inappropriate conduct, and that he subsequently learned that Palmer met with Foley.

An internal review released by Hastert's office on Sept. 30 says the first notice to Hastert's aides about Foley wasn't until the fall of 2005 — and it didn't come from Fordham.

Rather, the review said, it came from the office of Rep. Rodney Alexander, R-La., after the lawmaker learned of an overly friendly – but not sexually explicit — e-mail from the Florida Republican to a page from the congressman's state.

Palmer has publicly disputed Fordham's account. It was not clear when the ethics committee will question him.

The contradiction between the staff aides is almost outdone by Hastert's conflicts with statements by two members of his leadership team: Majority Leader John Boehner, R-Ohio, and the House Republican campaign chairman, Rep. Tom Reynolds, R-N.Y.

Longtime conservative leader Paul Weyrich said Tuesday that Hastert had assured him that Boehner was wrong when he said that he had told Hastert months ago about the page problem with Foley.

"As to Congressman Thomas M. Reynolds, the speaker said, 'If he had mentioned this problem to me, I surely would have taken notice,"' Weyrich said in an e-mailed account of a phone conversation with Hastert.

Weyrich quoted Hastert as saying that Reynolds often came to him with numerous requests to help incumbents in trouble. "The speaker said he signs off on the majority of requests and only listens with one ear because the requests are repetitive," Weyrich said.

"Did Reynolds during such a session drop the bombshell about Foley in the speaker's lap without the speaker's comprehending what was being told to him? 'That is possible but unlikely,' the speaker said. In any case, he has absolutely no recollection," Weyrich said.

A spokesman for Hastert had no comment. A Reynolds spokesman, L.D. Platt, said Hastert had already said he didn't recall the conversation.

But most people apparently believe top Republicans knew about Foley's conduct early on, according to a new CBS News/New York Times poll. Sixty-two percent said they think members of the House Republican leadership were aware of the messages before they became public.

A full 80 percent of Americans said the Foley matter should be taken seriously.