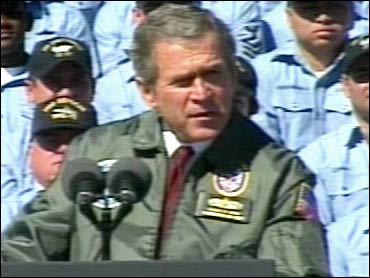 President Bush will arrive aboard the USS Abraham Lincoln on Thursday when an experienced pilot lands a tiny plane on the carrier's deck, with only a steel cable to slow down the speeding craft.

The president's speech to the nation will also require a deft touch. He wants to call the war in Iraq a success and give Americans some sense of finality even though troops remain on the ground and in harms way.

Six weeks ago, Mr. Bush appeared on television to inform the nation that the war had begun with a mission targeting Iraq's leader, Saddam Hussein.

His Thursday night speech, scheduled for 9 p.m. ET, is intended as a companion to those remarks.

Mr. Bush is to declare that major combat is finished and proclaim that the speedy military operation has improved the security of the United States and liberated the Iraqi people from Saddam Hussein's brutal reign, White House press secretary Ari Fleischer said.

"This is a marked and important moment because … the Iraqi people now have freedom. The threat to the United States has been removed," Fleischer said.

Still, the president will carefully parse his words so that he does not declare either victory or an end to war.

Such declarations could trigger international provisions requiring the speedy release of prisoners of war, limiting efforts to go after deposed Iraqi leaders and designating the United States as an occupying power.

Another factor is the situation on the ground. U.S. troops have fired on and killed anti-U.S. protesters in recent days, for instance, after saying they were fired on first from among the crowds. "Threats do, indeed, remain," Fleischer said.

Iraq's suspected weapons of mass destruction that were Bush's rationale for war — but which have not been found — are another tricky topic. So is Saddam's fate, despite two U.S. attempts to kill him.

In paying his tribute to the troops, Mr. Bush was to portray the Iraq war as just one piece of the continuing war on terror.

He also was to broadly outline his vision of a new kind of warfare, a senior administration official said.

Mr. Bush was being ferried to the ship, still hundreds of miles off the California coast, by a tiny Navy plane. The S-3B "Viking" — to be called Navy One because of its presidential passenger — has room only for the president, riding in the front seat next to the pilot, and two or three more passengers.

The president was to be treated with an exciting — though, according to administration officials, not considered risky — landing. As the plane lands on the Lincoln, cables stretched across the deck are to catch it and wrench it to a stop in less than 300 feet.

"Never can tell what's going to kick in," the president, a former pilot, joked to reporters before an Oval Office meeting Wednesday with the president of Colombia. "Let me just say, stay clear of the landing pattern."

Rear Adm. John Kelly, commander of the Lincoln battle group, said Thursday on CBS News The Early Show that the pilot slated to land Mr. Bush on the carrier "has flown through extraordinary pressure in support of combat operations for months now. I am very confident that he'll do a great job."

White House Communications Director Dan Bartlett said Thursday on NBC that flying the jet to the carrier "is actually safer that a helicopter because you have the ability to eject. In a helicopter, if something goes wrong, you're stuck."

Once aboard, Mr. Bush was having lunch with crew members and taking a tour of the 1,100-foot ship before his evening remarks.

Providing the backdrop for the speech are the more than 5,000 sailors and Marines who are still aboard USS Abraham Lincoln and will be only hours away from seeing their families for the first time in nearly 10 months.

The ship, bound for its home port of Everett, Wash., is to reach San Diego Friday.

A total of 16,500 sorties were launched from the Lincoln deck as part of three separate Pentagon missions — the operation to patrol the southern no-fly zone in Iraq, the military's efforts in Afghanistan and the war in Iraq. No aircraft or Navy personnel were lost in the sorties.

The president was spending the night on the ship, although he was leaving ahead of its arrival into port so his presence would not delay troops' reunion with loved ones. He will return to land by helicopter.