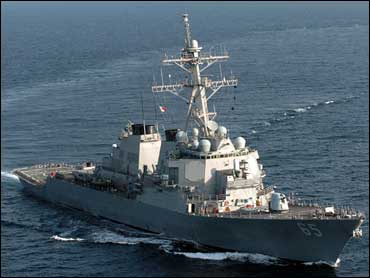 A federal judge on Wednesday threw out a conviction against a former Navy sailor accused of passing along information about ship movements, dealing a post-mortem blow to a Bush administration that had praised the case as a success.

U.S. District Judge Mark Kravitz overturned last year's conviction of Hassan Abu-Jihaad, of Phoenix, on a charge of providing material support to terrorists, citing the language of the law. He upheld his conviction for disclosing classified national defense information.

Abu-Jihaad was a signalman aboard the USS Benfold. He was accused of passing along information including the makeup of his Navy battle group and a drawing of the formation the group would use to pass through the dangerous Strait of Hormuz in the Persian Gulf in April 2001.

The ship was not attacked.

Kravitz said that Abu-Jihaad received a fair trial and denied a motion for a new trial. But he said he was overturning one of the convictions "for reasons largely related to the language" of the law.

To convict Abu-Jihaad of providing material support to terrorists, the jury had to find that he provided personnel or physical assets. But Kravitz said there was no evidence that would allow the jury to conclude Abu-Jihaad provided personnel or willfully caused the battle group document to be placed on a computer floppy disc, which could be considered a physical asset.

But in upholding the other charge, the judge said Abu-Jihaad had motive, citing his praise of the attack on the USS Cole as a "martrydom operation," that he had access to the secret information and that he was in frequent communication with the suspected terrorism supporters.

"This was not an open and shut case," Kravitz wrote. "In many ways, it was a difficult case for the government to prove."

Dan LaBelle, Abu-Jihaad's attorney, said the ruling pleased him. "It's very thorough and thoughtful," he said.

Abu-Jihaad's conviction was hailed last year by top national security officials and federal investigators as a model of cooperation among government agencies. Prosecutors say they are reviewing the latest ruling.

Abu-Jihaad, who was honorably discharged in 2002, faced up to 10 years in prison on each count. He sought a new trial in October, saying prosecutors lacked evidence and inflamed the jury by playing videos he bought that promoted violent jihad, or holy war.

Prosecutors say investigators discovered files on a computer disk recovered from a suspected terrorist supporter's home in London that included the ship movements, as well as the number and type of personnel on each ship and the ships' capabilities.

Abu-Jihaad was charged in the same case that led to the 2004 arrest of Babar Ahmad, a British computer specialist accused of running Web sites to raise money, appeal for fighters and provide equipment such as gas masks and night vision goggles to terrorists.

Ahmad, who lived with his parents, where the computer file was allegedly found, and was arrested in London, is to be extradited to the U.S.