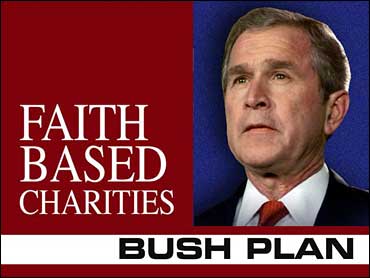 President Bush, brushing off critics who say he's pushed his faith-based initiative for political gains, reaffirmed his commitment to letting religious groups compete for government money so long as they help anybody in need.

"We ought to judge faith-based groups by results, not by their religion," Mr. Bush said Tuesday to more than 250 religious leaders gathered for a speech here to push his initiative, which has stalled in Congress.

Undeterred by congressional inaction, Mr. Bush sidestepped lawmakers with executive orders and regulations to give religious organizations equal footing with nonsectarian ones in competing for federal contracts.

He pushed Congress to codify the executive orders into law this year.

"It is said that faith can move mountains," Mr. Bush said. "Here in Washington, D.C., those helping the poor and needy often run against a big mountain called bureaucracy. I'm here to talk about how to move that mountain so that we can reach out and partner with programs which reach out to people who hurt."

The president has long pushed to let religious groups compete for taxpayer dollars, so long as their services are available to anybody in need. Opponents fear the government would wind up paying for religion. They also object to allowing taxpayer-funded groups to hire and fire based on religious persuasion.

Mr. Bush said he knows such money cannot be used for programs that discriminate on the basis of religion, reports CBS News Correspondent Mark Knoller.

"They can't say only Methodists who drink too much can come to our program. 'All Drunks Are Welcome' is what the sign ought to say," Mr. Bush said.

Last month, David Kuo, former deputy director of the White House Office of Faith-Based and Community Initiatives, alleged that Mr. Bush has gained politically from his vow to let religious-affiliated organizations use federal money to help the needy, but that his administration lacks a commitment to the initiative.

Mr. Bush defended himself, saying, "I'm firmly committed to making sure every American can realize the promise of our country."