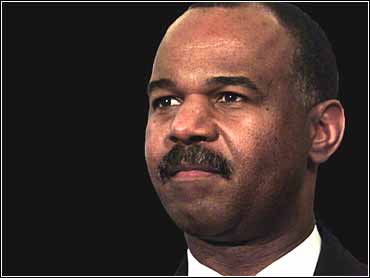 Preparing to make his first judicial nominations, President Bush has dumped the last of President Clinton's judicial nominees, including the first black appellate judge in the circuit with the most minorities in the nation.

But Roger Gregory, who was the first black judge on the 4th U.S. Circuit Court of Appeals in Richmond, Va., when appointed temporarily by Mr. Clinton, might still have a chance to stay on the bench, officials said.

"Some of these individuals will be considered for positions in the Bush administration," White House spokesman Scott McClellan said. "No one should be considered ruled in or out at this point."

Mr. Bush on Monday officially withdrew 62 executive and judicial nominations made by Clinton in his last days, including Gregory. The 4th U.S. Circuit — comprising Maryland, North Carolina, South Carolina, Virginia and West Virginia — includes more minorities than any other circuit in the nation.

"President Clinton appointed a highly qualified, well-respected lawyer in Roger Gregory," said Julia Payne, the former president's spokeswoman. "It's clear that Roger Gregory met every qualification to be on this court except for the right-wing litmus test."

Mr. Clinton gave Gregory and more than 42 other nominees recess appointments after they weren't considered by the Senate last year. But the recess appointment only allows the nominee to serve until the end of the year.

So Mr. Clinton renominated Gregory and some other judicial candidates not considered by the Senate Judiciary Committee before he left office and it is those nominations Mr. Bush is pulling back.

Democrats complained last year that the Republican-controlled committee had been unfair to women and minority candidates. Republicans denied the charge.

"I am disappointed that such qualified nominees, some of whom have been waiting four years for a hearing and a vote, have been withdrawn," said Sen. Patrick Leahy, the Judiciary Committee's ranking Democrat.

The decision to withdraw the Clinton judicial nominees comes as Mr. Bush starts to look at filling the remaining vacancies with his own nominees.

White House counsel Albert Gonzales and Attorney General John Ashcroft met with top officials from the American Bar Association on Monday to discuss the nomination process. A committee of senior administration officials led by Gonzales has interviewed more than 50 candidates in a drive to fill nearly 100 vacancies with judges who share Mr. Bush's conservative philosophy.

However, with the 50-50 Senate split, Democrats have more power in the committee.

Other jdicial nominees whose names were withdrawn included:

Republicans have complained bitterly about President Clinton using his recess power to go around the Senate nomination process, which caused a rift between the president and several GOP senators. However, Virginia's two Republican senators, George Allen and John Warner, have urged Mr. Bush to keep Gregory on the bench.

"I urge President Bush to renominate Judge Gregory strictly on his merits and I firmly believe we should rise above our feelings about the method by which he was originally appointed and act in a statesmanlike manner," Allen said Monday.