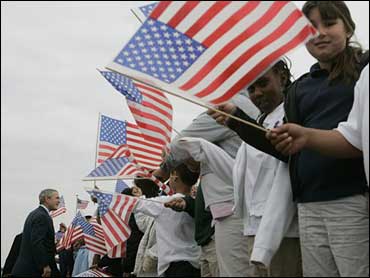 President Bush took a swat at his critics Tuesday, bluntly declaring that if Democrats take control of Congress, the nation's stance against terrorism will soften.

He scolded Democrats who voted against his warrantless wiretapping program to monitor the communications of suspected terrorists and legislation to detain, interrogate and question high-value terrorist suspects.

"On each of these programs, the Democrats have said they share our goals. But when it comes time to vote, they consistently oppose giving our personnel the tools they need to protect us," Bush said at a $400,000 breakfast fundraiser for Rep. Richard Pombo, held 60 miles east of the San Francisco Bay area.

"Time and time again, the Democrats want to have it both ways. They talk tough on terror, but when the votes are counted, their softer side comes out," he said.

In the home stretch of campaigning for the Nov. 7 elections, Bush is using his $2.3 million fundraising sprint through Nevada, California, Arizona and Colorado to try to portray distinct differences between Democrats and Republicans, especially on waging the war against terror.

Bush said the CIA program to interrogate high-target terrorist suspects has helped foil attacks, and he asked Democrats who voted against the detainee legislation to explain their opposition to voters.

"If they feel we are safer without this program, the Democrats in the United States Senate need to explain to the American people which of the attacks that the CIA program stopped would they have been willing to let go forward," Bush said.

He is trying to frame next month's elections around the economy and national security, but he has to talk loudly to be heard over the static caused by setbacks recently suffered by the Republican Party.

The White House has been seeking to rebut a recent intelligence report that suggests the Iraq war has helped recruit more terrorists and journalist Bob Woodward's new book, "State of Denial," that suggests Bush has not been completely upfront about the severity of the security situation in Iraq.

And on Capitol Hill, House Republican leaders are being asked about how long they knew about former Republican Rep. Mark Foley's inappropriate communications with teenage males who worked as pages. After the fundraiser, Bush visited a local school where he said he was "shocked and dismayed" by Foley's behavior and said he supports House Speaker Dennis Hastert's call for a full investigation.

Later, Bush was attending a $600,000 fundraiser in El Dorado Hills for Rep. John Doolittle and then raising $1.3 million at a Republican National Committee event in the Los Angeles area.

About 150 anti-Bush demonstrators protested across from the site of the Pombo fundraiser. Both Pombo and Doolittle easily survived primary challenges this year from opponents who criticized them for their connections to disgraced lobbyist Jack Abramoff.

One presidential action was tucked into Bush's Tuesday schedule, perhaps to help the various campaigns defray the cost of getting the president to the political events. Bush signed the Partners for Fish and Wildlife Act. Pombo sponsored the House version of the bill, which aims to help landowners restore and manage fish and wildlife habitats on private property.