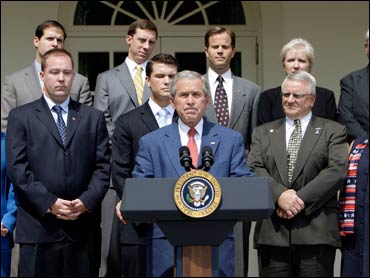 President Bush, ratcheting up a fight with Congress over Iraq, accused Democrats on Friday of conducting a political debate on the war while delaying action on money to upgrade equipment and give troops a pay raise.

"It is time to rise above partisanship, stand behind our troops in the field, and give them everything they need to succeed," Mr. Bush said in the Rose Garden after meeting with veterans and military families.

Mr. Bush spoke two days after Senate Republicans thwarted a Democratic proposal to pull out troops from Iraq. He said that instead of approving money for the war, "the Democratic leaders chose to have a political debate on a precipitous withdrawal of our troops from Iraq."

Despite Bush's suggestion that the bill is a must-pass measure that would pay for critical war programs, the legislation is not an appropriations bill that feeds military spending accounts. Called the defense authorization bill, the legislation is a policy measure used by Congress to influence the management of major defense programs, set goals and guide the 2008 military spending bill.

The bill is needed, however, to authorize military pay raises. Congress typically does not finish the bill before fall, and the pay raises are applied retroactively.

She blamed Republicans working with the president for blocking a change in direction in Iraq and pointed out the president's complaint about a delay in a pay raise for the troops is a little odd since he threatened to veto this same bill two months ago because he thought the 3.5% pay raise was too high.

Meanwhile, the White House said it has not changed the timetable for assessing progress in Iraq and that September remains the next critical timeframe for judging the course of the war. A day earlier, a top general said a solid judgment may not come until November.

The officer, Lt. Gen. Raymond Odierno, suggested Friday that his comments may have been misinterpreted. Another general, Maj. Gen. W.E. Gaskin, commanding in a province touted as a model of progress, said it would take two years before Iraqis can be self-sufficient in running their government and security forces.

And yet another general, Maj. Gen. Richard Lynch, who leads the 3rd Infantry Division — said his area of responsibility south of Baghdad may need through summer 2008 to consolidate recent gains.

Gaskin spoke to Pentagon reporters by video conference from Iraq. He said coalition efforts "have turned the corner ... broken the cycle of violence in Anbar." But, he added, "you cannot buy, nor can you fast-forward experience. It has to be worked out."

Pressure is building on the administration to change course in the war, now in its fifth year and with a death toll of at least 3,628 members of the U.S. military.

When asked whether he would be satisfied to wait until November, McConnell said "September is the month we're looking at."

White House press secretary Tony Snow said that despite widespread skepticism in Congress, there have been significant results one month after the U.S. completed a buildup of 21,500 additional combat troops. He said the administration was not trying to move the goal posts for assessing the buildup, from September until November.

In his remarks, Mr. Bush said the war has had "frustrating setbacks. It's also had important successes." He pointed to the turnaround in Anbar province and the capture of one of al Qaeda's top leaders in Iraq.

"Our nation deserves a serious debate about Iraq," Bush said, "because the outcome of this conflict will have enormous consequences for our country."

"Failure in Iraq would send an unmistakable signal to America's enemies that our country can be bullied into retreat," the president said. "America's involvement in Iraq does not have to end this way. A free and stable Iraq is still in reach."

Most lawmakers have hoped that Iraq would show more signs of stability this summer, long before the 2008 U.S. elections. Republicans in particular have thought that, if substantial gains could not be found by September, then Mr. Bush would have to rethink his military strategy, which relies on 158,000 U.S. troops.

"I'm not optimistic," Sen. Susan Collins, R-Maine, said of the September assessment. She spoke after attending a classified briefing Thursday at the Pentagon by Gen. David Petraeus and Ryan Crocker, the top U.S. diplomat in Iraq.

The Bush administration has tried to minimize the importance of the progress report due in September, trying to make clear it is not the final judgment. Beyond that, the administration is saying U.S. forces will play a role in Iraq through the end of Bush's presidency, in January 2009.