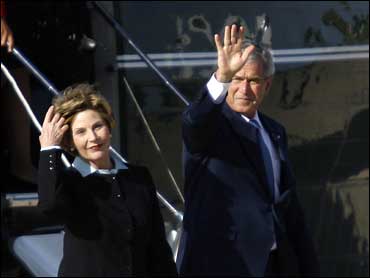 President Bush warned in an interview Tuesday that the Democratic presidential candidates' plans to withdraw abruptly from Iraq could "eventually lead to another attack on the United States" and would "embolden" terrorists.

In a White House interview with Politico and Yahoo News - a president's first for an online audience - Bush said his doomsday scenario for a premature withdrawal "of course is that extremists throughout the Middle East would be emboldened, which would eventually lead to another attack on the United States."

For the first time, Bush revealed a personal way in which he has tried to acknowledge the sacrifice of soldiers and their families.

"I don't want some mom whose son may have recently died to see the commander in chief playing golf," he said. "I feel I owe it to the families to be in solidarity as best as I can with them. And I think playing golf during a war just sends the wrong signal."

Bush said he made that decision after the August 2003 bombing of the United Nations headquarters in Baghdad, which killed Sergio Vieira de Mello, the top U.N. official in Iraq and the organization's high commissioner for human rights.

"I remember when de Mello, who was at the U.N., got killed in Baghdad as a result of these murderers taking this good man's life," he said. "I was playing golf - I think I was in central Texas - and they pulled me off the golf course and I said, 'It's just not worth it anymore to do.'"

In a reversal of the usual question that's put to him, a query submitted online asked the president whether he felt he had been misled about Iraq as he made the decision to go to war.

"'Misled' is a strong word, it almost connotes some kind of intentional," Bush said. "I don't think so. … Intelligence communities all across the world shared the same assessment. And so I was disappointed to see how flawed our intelligence was."

Congress has since pushed, and Bush has signed, various intelligence reforms, including the creation of a director of national intelligence, whose job it is to help the various parts of the intelligence community share information.

"Do I think somebody lied to me?" he said. "No, I don't. I think it was just, you know, they analyzed the situation and came up with the wrong conclusion."

- The president said global warming has "been more clearly defined as a problem" during his eight years in office, and when asked if it is real, Bush said: "Yes, it is real; sure is."

"I could have supported a lousy [Kyoto] treaty and everybody would have went, 'Oh, man, what a wonderful-sounding fellow he is,'" Bush said. "But it just wouldn't have worked."

- Asked a question that was submitted online about skyrocketing gas prices, Bush said the problem doesn't have "a quick answer."

"It took us a while to get to where we are - very dependent on oil," he said. "So my answer ... is that the best thing we can do is to increase supply and to drill for oil and gas in environmentally friendly ways at home and build more refineries."

Bush continued to hedge on whether he would support the federal gas tax holiday being pushed by Sens. Hillary Rodham Clinton (D-N.Y.) and John McCain (R-Ariz.) in their respective presidential campaigns. "I'll consider it," he said. "There's all kinds of ideas. … The truth of the matter is that in order for there to be a substantial change, either consumers have to change their habits … or there has to be an increase of supply."

- As he prepared to head out Tuesday night for a trip to Israel, Egypt and Saudi Arabia, he said Americans should be concerned about incremental progress in the Middle East, even though a grand peace between Israelis and Palestinians continues to look distant."

"Americans at home ought to care for the advance of free societies throughout the Middle East. After all, this is the center of anti-Americanism and hatred," he said. "The big challenge in the 21st century is to advance freedom in the Middle East for our security."

- Congress is "stalled" after 18 months of Democratic leadership. "I've laid out a very aggressive agenda … and there hasn't been much action," he said. "We got a housing crisis, and I proposed a reasonable set of reforms. And so I would call them stalled. I would call them, so far, good at verbiage and not so good at results."

- He criticized former President Jimmy Carter for suggesting an approach to Middle East involvement that Bush described as "if you want to be popular in the Middle East, just go blame Israel for every problem."

"That will make you popular," he said. "Popularity is fleeting. … Principles are forever."

- He's not concerned about ugly racial debate if Sen. Barack Obama (D-Ill.) is the presidential nominee.

"I think most Americans are open-minded people, and they're going to pick the president who can keep America safe and keep taxes low," he said. "My own judgment is … that race will only enter in if it's provoked by the press."

- While offering earthquake aid to Hu Jintao, the president said he urged the Chinese leader to pressure the junta of cyclone-stricken Myanmar, the former Burma, to be more open to Western aid.

"I told President Hu Jintao today, of China, if you get - if you're in touch with the Burmese, tell them that we're genuine in our efforts to want to help," Bush said. "We've been disappointed by the response. It's taken these people too long to move. It's almost as if they're in a state of denial. But we'll see. We're beginning to make some progress there in terms of getting our aid in."

- This past weekend's wedding of his daughter Jenna to Henry Hager at the Bush family's Crawford, Texas, ranch "went exactly the way she hoped it would go," Bush said.

"I was thinking, 'This is one beautiful bride, and Henry is a lucky man,'" he said.

Ahead of the wedding Bush watched the Steve Martin comedy "Father of the Bride." He said the lesson he took from the movie was: "Write the check and be happy."

- In January he plans to return to e-mail, which he gave up when he took office to avoid leaks. He said he looks forward to "e-mailing to my buddies," and said he was a heavy e-mailer in Texas.

- His Christian faith has increased in office, since "part of the faith walk is to understand your weaknesses and is to constantly try to embetter yourself and get closer to the Lord, and that's a daily occurrence."

"Obviously, there's been some tough moments in here," he said. "When you know that somebody lost their loved one as a result of a decision that I made, that's a tough moment. If you're a faithful person, you try to empathize with the suffering that that person is going through. On the other hand, there is a knowledge that the good Lord can comfort during these moments of grief. And that's what I ask for in my prayer."

- Perhaps tellingly after a rough seven and a half years, the president said one of his happiest moments in the Oval Office came the day he took office.

"My dad was upstairs at the White House preparing for the inaugural balls," he recalled. "And I said to him: 'Let's go on over to the Oval Office' - I hadn't been in the Oval Office as president yet. And so I came over here before he got here, and he walked through that door right there and it was a happy moment to see my dad come in the Oval Office. I love him dearly."

Asked if his father is proud of him, the president said: "Oh, yes, no question he is. And I'm proud of him. … [H]e's sitting there complaining about this editorial or that - I said, man, I don't even pay attention to it, because I don't. But, yes, he's very proud of me, you can imagine - and proud of Jeb and he's proud of all his children for different reasons."

- On who does the better impression, Will Ferrell of him or Dana Carvey of his father, he had a quick answer: "Dana Carvey."
By Ben Smith