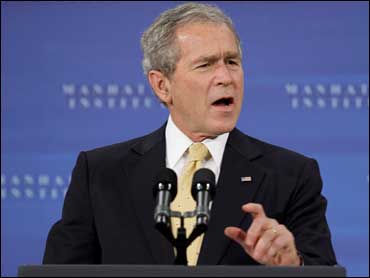 President Bush asserted Thursday that the global financial crisis is "not a failure of the free market" and urged world leaders to adopt modest financial reforms that stop short of the tighter regulations Europeans favor.

"Our aim should not be more government. It should be smarter government," Mr. Bush said during a speech in New York, a day before about two dozen world leaders converge on Washington for a weekend summit he is hosting.

The president delivered a vigorous defense of free-market capitalism and easier global trade to frame his approach to the high-level gathering. Mr. Bush invited representatives of some of the world's biggest industrial democracies, emerging nations and international bodies to Washington to start developing a more coordinated world response to the economic woes that have millions of people struggling to keep their jobs, their homes and their hopes.

With the severe economic downturn threatening to end Mr. Bush's tenure on a sour note before President-elect Barack Obama takes over, he will host the leaders at a White House dinner Friday and review causes and solutions for the financial mess Saturday.

It was fitting that Mr. Bush's argument against regulatory overreach was delivered not in Washington but from the heart of Wall Street. He spoke at venerable Federal Hall, which was home to the first Congress and is within shouting distance of New York Stock Exchange.

Mr. Bush called for reforms to strengthen the global economy long-term and said leaders at this weekend's meeting would "discuss specific actions we can take."

Among the areas for possible agreement, Mr. Bush listed:

Notably absent from his speech was any talk about what the U.S. might do to bail out the troubled auto industry or the debate over a second U.S. stimulus package.

"The crisis was not a failure of the free market system," Mr. Bush said. "And the answer is not to try to reinvent that system."

But Mr. Bush's argument that "government intervention is not a cure-all" came as some critics think his administration already is overstepping in private markets. The federal dollars being spent or put on the line to rebuild the nation's financial system could easily run into the trillions. Already the Bush administration has enacted a $700 financial rescue package, backed the purchase of investment bank Bear Stearns, bought stock in leading banks, engineered a government takeover of mortgage giants Fannie Mae and Freddie Mac, guaranteed money market fund holdings and funneled billions to stabilize troubled insurance giant American International Group.

"I'm a market-oriented guy, but not when I'm faced with the prospect of a global meltdown," Mr. Bush said.

At the same time, the president aggressively defended the U.S. against charges from around the world that insufficient U.S. regulation led to the credit collapse worldwide. This was his way of pushing back against both the criticism and the calls by allies for more intrusive rules. Heading into the meeting, Europeans are seen as looking more urgently for broad changes and tighter universal banking regulations than is the United States.

"Many European countries had much more extensive regulations and still experienced problems almost identical to our own," Mr. Bush said.

Some critics have said that lax oversight by U.S. and other regulators failed to detect problems and respond with action that could have prevented the meltdown. The crisis began with the collapse of the U.S. housing market, which froze credit, then shook the broader financial sector and finally rippled overseas.

Dan Price, Mr. Bush's deputy national security adviser for international economic affairs, rejected suggestions of discord with other nations and said it was "grossly inaccurate" to suggest the U.S. was not taking a firm lead in reform.

"We are no less committed to fixing the problems, and addressing regulatory and other deficiencies, than any other leader," he said.

While in New York, the president addressed a conference at the United Nations on religious tolerance and met privately with King Abdullah of Saudi Arabia.

The summit is just the first in a series intended to deal with the enormity of the economic meltdown, and the next meeting won't be until after Bush leaves office on Jan. 20.

In the United States alone, the nation's jobless ranks zoomed past 10 million last month, the most in a quarter-century, as 240,000 more people lost jobs. In the latest dire sign, American automakers say they are struggling to survive.

Mr. Obama is steering clear of the summit but will have a couple representatives available to meet with leaders on his behalf.