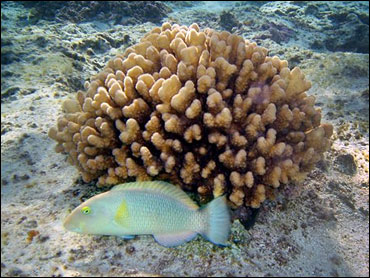 The nation's newest national monument covers an archipelago stretching 1,400 miles long and 100 miles wide in the Pacific Ocean. It's home to more than 7,000 species, at least a fourth of them found nowhere else.

Mr. Bush announced his creation of the nation's 75th national monument at a White House ceremony. The decision immediately sets aside 140,000 square miles of largely uninhabited islands, atolls, coral reef colonies and underwater peaks known as seamounts to be managed by federal and state agencies.

In introducing the president, first lady Laura Bush quoted Mark Twain, who once described Hawaii as "the loveliest fleet of islands that lies anchored in any ocean."

Conrad C. Lautenbacher, head of the National Oceanic and Atmospheric Administration, which will manage nearly all of it, said the new protected area would dwarf all others.

"It's the single-largest act of ocean conservation in history. It's a large milestone," Lautenbacher said. "It is a place to maintain biodiversity and to maintain basically the nurseries of the Pacific. It spawns a lot of the life that permeates the middle of the Pacific Ocean."

It is only the second time that Mr. Bush has invoked the 1906 National Antiquities Act, which gives the president authority to create national monuments to preserve the nation's ancient cultural sites and unusual geological features. The law itself turned 100 this month.

The president had planned as late as Wednesday to use instead the National Marine Sanctuary Act, a law that would allow challenges from Congress and others to the decision, said a senior administration official, speaking on condition of anonymity so as not to upstage Mr. Bush.

"This means the area will get immediate protection rather than having to wait another year," the official said, adding that Mr. Bush opted at the last minute to create a national monument after realizing the process had gone on for five years and elicited thousands of comments.

With the national monument designation, the federal government can immediately begin a five-year phaseout of the eight commercial fishing permits in the area and impose strict prohibitions on any other extractive uses, the official said.

In February, Mr. Bush used the antiquities law for the first time when he declared part of the African Burial Ground in the lower Manhattan section of New York City a national monument. The site, covering less than half an acre, marks where an estimated 20,000 slaves and free blacks were buried in the 18th century.

President Clinton used the act to create 19 national monuments and expand three others to set aside 5.9 million acres of land, mainly in the West, and he drew widespread criticism from conservatives.

About 132,000 square miles of the marine area that is being set aside for the national monument already is designated either a coral reef ecosystem reserve or a national wildlife refuge. By making it a national monument, the government will have greater power to protect it.

Expanding the existing reserve and refuge to a monument of 140,000 square miles will make it the largest no-take marine conservation area in the world, just ahead of the Great Barrier Reef in Australia.

Midway Atoll, one of the outermost points of the new monument, will retain an emergency landing strip for commercial and military trans-Pacific flights.

NOAA will develop regulations for managing all of the monument except for two national wildlife refuges within it that will still be overseen by the Fish and Wildlife Service. Last month, state and federal officials signed an agreement to manage the pristine islands jointly.

Administration officials say their intent is to preserve zoned access for native Hawaiian activities, educational and scientific expeditions. Recreational and tourist visits that are no more harmful than scuba diving or photography also will be allowed. Permits, however, will be required for all activities.

Joshua Reichert, who heads the private Pew Charitable Trusts' environment program which pushed for the sanctuary for eight years, said the region contains almost 70 percent of the tropical shallow water coral reefs in the United States.

"When you add it all up, it's a world-class ecological jewel," he said. "From both a national and global perspective, this really is a landmark conservation event."