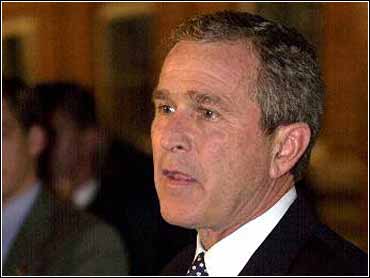 The Bush campaign charges that Democratic "dirty tricks" are responsible for the disclosure of information about George W. Bush's 1976 drunk driving arrest.

Campaigning in Grand Rapids, Mich., Bush told a large, enthusiastic crowd, "It's become clear to America in the course of this campaign that I have made mistakes in my life, but I'm proud to tell you that I've learned from those mistakes."

The GOP nominee, who has made character a central plank of his campaign, spoke a day after he was forced to admit that at age 30 he had been arrested for drunk driving in Kennebunkport, Maine, pleaded guilty, paid a $150 fine and had his permission to drive suspended for 30 days.

The acknowledgement came after a local TV reporter, Erin Fehlau, obtained a copy of the court docket of Bush's arrest.

Tom Connolly, a Portland lawyer and Democratic activist who ran unsuccesfully for governor two years ago, says he passed the docket along to Fehlau after being alerted to the case by "a public figure," whom he would not name.

"It's not a dirty trick to tell the truth," Connolly said, maintaining that Bush should have made the case known a long time ago.

The Bush campaign's Hughes seized on Connolly's political affiliations, saying she found it "interesting that in the closing days of this campaign, the Democratic candidate for governor of Maine has now admitted that he is the one who released this information to the public and to the media ... about something that happened 24 years ago."

Connolly has denied any connection to the campaign of Democratic candidate Al Gore and Gore campaign chairman Bill Daley categorically denied any involvement saying "charges to the contrary are irresponsible."

Bush was pulled over by police near his family's Kennebunkport summer home on Sept. 4, 1976. Hughes said Bush had several beers at a local bar before he was stopped.

The arresting officer, Calvin Bridges, said that he recalled driving home from work after midnight and spotting a car slipping briefly onto the shoulder before getting back on the road.

Bush, the driver, failed a road sobriety test and a second test in the police station, registering a 0.10 blood-alcohol level the legal limit at the time, Bridges said.

Asked about Bush's demeanor, the retired officer said, "The man was, and I say this without being facetious, a picture of integrity. He gave no resistance. He was very cooperative."

Bridges, 51, said Bush was accompanied by two women and a man. Hughes said they were Bush's sister, Dorothy, the Australian tennis player John Newcombe and his wife.

The Texas governor has said he quit drinking the day after his 40th birthday — July 6, 1986. Alcohol "was beginning to compete for my affections," he told an interviewer in September.

In related news, The Dallas Morning News on Friday reported that Bush was called for jury service in a 1996 drunken driving case in Austin, but was dismissed from the panel before potential jurors were questioned about their histories of drinking and driving.

P. David Wahlberg, the defense attorney who struck Bush from the jury panel, said Thursday that his action followed requests by the governor and the governor's lawyer to excuse him.

Although Bush at first said he would perform jury service, Wahlberg said, the governor's lawyer, Al Gonzales - later appointed by the governor to the Texas Supreme Court - argued it would be improper for Bush to sit on a criminal case in which he might be asked to grant clemency.

Bush isn't the only top member of the Republican ticket with a drunk driving offense under his belt. Bush's running mate, former Defense Secretary Dick Cheney, was twice arrested for drunken driving in the 1960s when he was in his early 20s, The Washington Post reported in July. Cheney revealed the drunken driving arrests privately when he was nominated for defense secretary in 1989, the paper said.