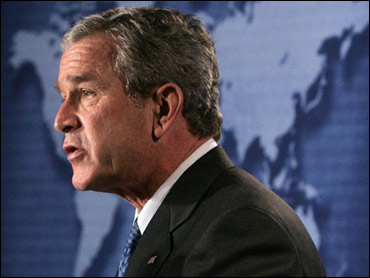 President Bush on Thursday called for spending $1.2 billion to cut malaria deaths in half by 2010 in Africa where many of its victims are children. "In the overwhelming majority of cases the victims are less than 5 years old — their lives ended by nothing more than a mosquito bite," Mr. Bush said.

The president also announced two other initiatives for the continent. He proposed doubling U.S. spending to $400 million to promote the education of girls in Africa and said he wanted Congress to approve $55 million over three years to improve legal protections for women in Africa against violence and sexual abuse.

The announcements came as Mr. Bush prepares to travel to Scotland next week for a meeting of major industrial democracies and Russia that is focused on Africa. He said that in Scotland, he will urge other nations and private foundations to help fight malaria in Africa as well.

"The world must take action now," he said.

In London, Blair's office called the announcement "an important and welcome step."

"We welcome the president's focus both on governance and democracy as well as on the key issues of girls' education and malaria," the statement said. "We want the G-8 to sign up to providing universal access to malaria prevention and treatment and to train millions of new teachers for Africa."

The new initiatives, along with $674 million in emergency famine relief announced earlier this month alongside British Prime Minister Tony Blair, allows Mr. Bush to blunt criticism that he is turning down Blair's proposals to double aid to Africa overall.
While Mr. Bush agrees with Blair to wipe out the debt many poor nations in Africa and elsewhere, the president says a doubling U.S. aid to Africa is not necessary because such assistance has already tripled during his presidency and is set to continue to rise.

Malaria is one of the top killers in Africa, and most of its victims are children. The ancient mosquito-borne disease infects as many as 400 million people worldwide, killing 1 million a year.

The malaria initiative aims to provide tens of millions of dollars to Tanzania, Uganda and Angola in the first year, adding at least four more countries in 2007 and at least five more in 2008 for an eventual total spending of $1.2 billion, Mr. Bush said. The president said his proposal would eventually cover 175 million people in at least 15 nations most affected by the disease.

"We know that large-scale action can defeat this disease in whole regions and the world must take action," Mr. Bush said. "Together we can lift this threat and defeat this fear across the African continent."

Because the disease is highly preventable, the money will pay for approaches such as providing insecticide-treated sleeping nets, encouraging greater use of insecticides indoors and financing a new generation of anti-malarial drugs.

As resistance to other anti-malarial drugs has grown, the World Health Organization has recommended the use of artemisinin-based combination drug treatments to fight the disease. The drug is extracted from artemisia annua, more commonly known as wormwood or sagewort, a plant native to Asia.