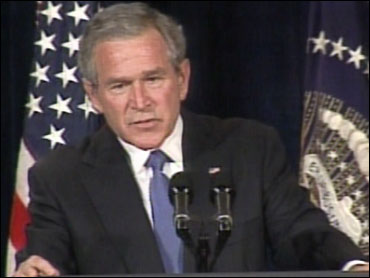 President Bush said Wednesday that Saddam Hussein, not continued U.S. involvement in Iraq, is responsible for ongoing sectarian violence that is threatening the formation of a democratic government.

In his third speech this month to bolster public support for the war, Mr. Bush worked to counter critics who say the U.S. presence in the war-torn nation is fueling the insurgency. Mr. Bush said that Saddam was a tyrant and used violence to exacerbate sectarian divisions to keep himself in power, and that as a result, deep tensions persist to this day.

"The enemies of a free Iraq are employing the same tactics Saddam used, killing and terrorizing the Iraqi people in an effort to foment sectarian division," Mr. Bush said.

Hundreds of Iraqis have been killed in sectarian violence and by death squads which minority Sunni Muslims say are operating inside the Shiite-dominated Interior Ministry since the Feb. 22 bombing of an important Shiite shrine in Samarra set off a wave of revenge attacks. On Wednesday, gunmen lined up 14 employees of an electronics trading company in Baghdad and shot them all, killing eight and wounding six.

"Iraq is a nation that is physically and emotionally scarred by three decades of Saddam's tyranny," Mr. Bush said in a speech to Freedom House, a more than 60-year-old independent organization that supports the expansion of freedom in the world.

"The president can give all the speeches he wants, but nothing will change the fact that his Iraq policy is wrong," said Reid, D-Nev. "Two weeks ago, he told the American people that Iraqis would control their country by the end of the year. But last week, he told us our troops would be there until at least 2009."

The president also pushed Iraq to speed up the formation of a unity government, seen as the best option to subdue the violence gripping several Iraqi cities

Mr. Bush said Iraq's instability "is the legacy of Saddam, a tyrant who exacerbated ethnic divisions to keep himself in power."

Mr. Bush said it's vital to the security of Iraq that its police force not be infiltrated with Saddam loyalists or members of illegal militias. The violence has raised the urgency for forming a government representing all ethnic groups, he said.

The United States has been pushing Iraq to speed up the formation of a unity government, seen as the best option to subdue the violence gripping several Iraqi cities, and to allow for the start of a U.S. troop withdrawal this summer.

But the talks are fragile in a country with deep sectarian differences between Shiites and Sunnis and daily violent death tolls in the dozens. U.S. Ambassador Zalmay Khalilzad has asked one of Iraq's most prominent Shiite politicians to seek the withdrawal of Prime Minister Ibrahim al-Jaafari's contentious nomination for a second term.

"I know that the work in Iraq is really difficult," Mr. Bush said, adding that a free Iraq in the Middle East is important to the security of America.

He criticized lawmakers calling for an immediate withdrawal of U.S. troops from Iraq, a move that Mr. Bush said would have disastrous consequences for American security. If troops were withdrawn now, Iraq would turn into a safe haven for terrorists, who could arm themselves with weapons of mass destruction and could attack moderate governments in the Middle East, he said.

"The Iraqi government is still in transition, and the Iraqi security forces are still gathering capacity," Mr. Bush said. "If we leave Iraq before they're capable of defending their own democracy, the terrorists will win."