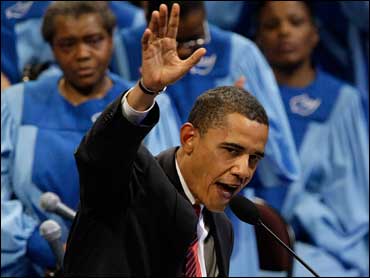 
The conservative Evangelical biographer of George W. Bush and Tom DeLay has moved on to a new subject: Barack Obama. And his new book, due out this summer, may lend credibility to Senator Obama's bid to win Evangelical Christian voters away from the Republican Party.

The forthcoming volume from Stephen Mansfield, whose sympathetic "The Faith of George W. Bush" spent 15 weeks on the New York Times bestseller list in 2004, is titled "The Faith of Barack Obama." Its tone ranges from gently critical to gushing, and the author defends Obama-and even his controversial former minister, the Rev. Jeremiah Wright-from conservative critics, and portrays him as a compelling figure for Christian voters.

"Young Evangelicals are saying, 'Look, I'm pro-life but I'm looking at a guy who's first of all black-and they love that; two, who's a Christian; and three who believes faith should bear on public policy," Mansfield, who described himself as a conservative Republican, said in a telephone interview. "They disagree with him on abortion, but they agree with him on poverty, on the war."

His book, provided exclusively to Politico by the publisher, focuses more on Obama's religious journey than his electoral prospects.

"For Obama, faith is not simply political garb, something a focus group told him he ought to try. Instead, religion to him is transforming, lifelong, and real," Mansfield writes, going on to compare Obama favorably to Christian Democratic presidents Jimmy Carter and Bill Clinton, who he says erected a "wall of separation" between their religion and their governance.

By contrast, "Obama's faith infuses his public policy, so that his faith is not just limited to the personal realms of his life, it also informs his leadership," Mansfield writes.

The book is published by Thomas Nelson, the world's largest Christian publisher. It's due out August 5. "The Faith of Barack Obama" is expected to retail in Christian outlets and the Wal-Mart chain of stores, as well as secular bookstores. A motivational speaker and former pastor, Mansfield is the author of several books on faith as well as the co-author of former House Republican powerhouse Tom DeLay's 2007 book "No Retreat, No Surrender," a defense of his tarnished legacy sprinkled with fierce attacks on his opponents and on liberal causes.

He contrasted Obama's relative "fluency" with the language of religion-his campaign has outlined a pitch to the "Joshua Generation," a common term in Christian circles for younger Evangelicals-with the approach of his Republican rival.

"The McCain campaign is pretty clumsy when it comes to religion," he said, noting McCain's courtship, then renunciation, of two prominent Evangelical pastors, John Hagee and Rod Parsley.

In his Fathers Day speech at a Chicago church Sunday, Obama again spoke explicitly of his personal Christianity: "We do what we can to build our house upon the sturdiest rock, and for me that means building that house on the foundation of Jesus Christ."

Mansfield's book validates Obama's attempt-which began in earnest in his 2004 speech to the Democratic National Convention-to provide a compelling public face to the nascent "Religious Left." In that speech, he proclaimed that "we worship an awesome God in the blue states," and Mansfield tracks his continuing attempts to contest the Republican hold on white Evangelical voters.

"Welcome to my house," Brownback told Obama on stage.

"This is myhouse too," Obama responded. "This is God's house."

Obama, Mansfield writes, "made it clear to all that he [will] not be moved from his rightful place in the Christian fold."

Obama's Christianity, however, has been under attack on two fronts this campaign season. The first is from a false, but widely held, belief that he is a Muslim. Mansfield dismisses that charge, then dwells at length on Obama's controversial church, Chicago's Trinity United Church of Christ.

Mansfield said in the interview that he entered Trinity having heard "that Obama's church was a cult, something un-Christian, that Reverend Wright was a nut," but emerged with the view that it is "a pretty solid Christian church."

His warm description of the church reflects that view.

Though Mansfield writes of some jarringly radical features of the black liberation theology from which Trinity is descended, he concludes that what it offers is the "'born-again, new birth, blood-washed, Spirit-empowered Chrstianity' that Evangelicals know."

"Few sermons this good will be preached anywhere in America on this Sunday morning," he says of the sermon he heard from Trinity's current pastor, Rev. Otis Moss.

Mansfield's book is addressed to Evangelical readers, and it raises some questions about his own faith, including his willingness to see contradictions in the bible, his belief that religions other than Protestant Christianity provide other "paths" to a "higher power," and his doubts about the afterlife.

There are also passages in Mansfield's book that may give Obama's secular supporters pause. In particular, a theme from his book on Bush-the suggestion that the president's rise was itself an act of God-reappears in his coverage of Obama. He approvingly quotes Obama's old rival Rep. Bobby Rush saying that Obama's Senate win was "divinely ordained."

"Increasingly, words such as called, chosen, and anointed are being used of Obama," he writes.

Despite Mansfield's praise of the candidate, however, and his view that Obama may win over large numbers of younger Evangelical voters, the author also demonstrates the limits to the Democrats' appeal.

Mansfield said he will vote against Obama in November for a single reason: "Because I'm pro-life."
By Ben Smith