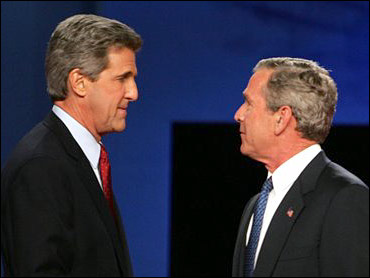 In the first of three crucial debates, Sen. John Kerry accused President Bush of a "colossal error in judgment" by ordering the invasion of Iraq. "The world is better off without Saddam Hussein," the president shot back, adding his rival once said so himself.

"I agree with him," the president added sarcastically, emphasizing his campaign theme that Kerry is a flip-flopper.

In a 90-minute debate Thursday night dominated by a war that has claimed more than 1,000 American lives, Kerry called the conflict a diversion in the broader struggle against terror and the hunt for Osama bin Laden.

The four-term Massachusetts senator said he could do a better job than Mr. Bush of protecting the nation against another Sept. 11-style attack, and pledged to be strong and resolute in fighting terrorism.

"But we also have to be smart ... and smart means not diverting our attention from the war on terror and taking it off to Iraq," Kerry said.

"This president, I don't know if he really sees what's happening over there," Kerry said of Mr. Bush, the two men standing behind lecterns 10 feet apart on the University of Miami debate stage.

The president swiftly returned to his theme of Kerry as a man who changes his mind too often to be president.

"He voted to authorize the use of force and now says it's the wrong war at the wrong time. .... I don't think you can lead if you say wrong war, wrong time, wrong place. What message does that send to our troops?" said the Republican incumbent.

Kerry ackowledged he'd made mistakes in explaining his position, but said the president was wrong to invade Iraq. "Which was worse?" he asked rhetorically.
A poll of more than 200 uncommitted voters who watched the debate conducted by CBS News and Knowledge Networks gave the edge to John Kerry. Forty-three percent of those polled said Kerry won the debate, 28 percent said the president won and another 29 percent said it was a tie.

"I think the president's strongest points came at the end," said CBS News Chief Washington Correspondent Bob Schieffer, "when he said that he'll fight the terrorists around the world so we don't have to fight them here at home. That seems to be the core of the president's message. That's what he's been talking about throughout this campaign.

"I think the headline that they'll write about Sen. Kerry tomorrow is that he accused the president of making a colossal error in judgment in deciding to fight this war in Iraq rather than to go after osama bin laden. That was Kerry's argument here tonight."

Thursday's meeting was the first time the candidates were squaring off in person after months of sparring indirectly through speeches, surrogates and hostile television ads.

The debate was particularly crucial for Kerry, trailing slightly in the polls and struggling for momentum less than five weeks before the election. The Democratic candidate faces the challenge of presenting himself as a credible commander in chief after a torrent of

Both men used well-rehearsed lines during their face-to-face encounter, but this was the first time each had to listen to the criticism at close quarters.

Mr. Bush appeared perturbed when Kerry leveled some of his charges, scowling at times and looking away in apparent disgust at others. Kerry often took notes when the president spoke.

There were a few light moments, the most prominent when they exchanged courtesies about their 20-something daughters. "Trying to put a leash on them," Mr. Bush quipped about twins Jenna and Barbara.

The debate unfolded scarcely a month before the election, the first in a series of high-stakes encounters between the president and his Democratic challenger. The two men meet Oct. 8 in St. Louis and again on Oct. 13 in Tempe, Ariz.

Kerry appeared to taunt the commander in chief at one point when he said his father, former President George H.W. Bush, had stopped troops at the Iraqi border after they had liberated Kuwait during the 1991 Persian Gulf War.

In response, Mr. Bush ridiculed his opponent, saying he denigrated U.S. allies in the war, voted against an $87 billion measure to aid Afghanistan and Iraq and sent mixed signals.

"What's his message going to be? Please join us in Iraq for a grand diversion?" Mr. Bush said to Kerry's contention that he could summon broader international support for the war. "They're not going to follow someone whose core convictions keep changing because of politics."

In response to one question, Kerry said the president had misled the country on the war by pledging to plan carefully, give diplomacy every chance to prevail and more. He said Osama bin Laden, the al Qaeda leader responsible for the Sept. 11 terrorist attacks, had used the invasion as a recruiting tool for terrorists.

Mr. Bush said that was an "amazing claim," and said the United States, not bin Laden, should decide America's strategy in the war on terror.

Again, he said Kerry had changed his mind on the war, but this time, Kerry said he had held one consistent position.

"The only thing consistent about my opponent's position is he's been inconsistent," said Mr. Bush, eager for the last word.

Hours before the debate, both sides had already launched efforts to control the post-debate spin.

The Democrats, in an email from party chairman Terry McAuliffe, urged supporters to "vote in online polls, write a letter to the editor, and call in to talk radio programs."

"We all know what happened in 2000," McAuliffe's email said. "Al Gore won the first debate on the issues, but Republicans stole the post-debate spin. We are not going to let that happen again."

The Republicans, meanwhile, were ready with a Web site – DebateFacts.Com – devoted to providing "real-time text and video responses to John Kerry's vacillation, defeatism and personal attacks during tonight's debate."

Outside the University of Miami campus, where the debate was held, hundreds of protesters gathered. Some carried flag-draped coffins and signs that read: "What's to debate. Bush lied, fire him."

About a dozen students and staff rallied in support of President Bush. Many waved pro-Bush signs including a bed sheet painted with the message "Cubans for Bush."

No arrests were reported, on or off the campus.