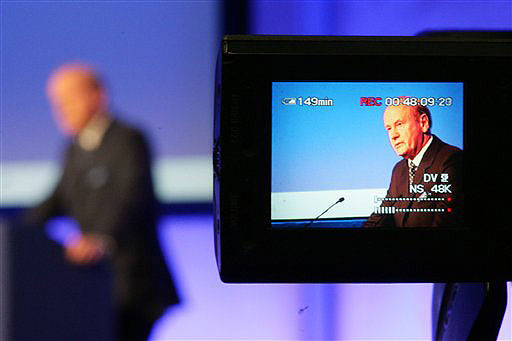 Al Gore and George W. Bush did their level best to get the most campaign vitamins they could from a flurry of stops in the Big Apple, from early Thursday on into early Friday.

Each candidate had a heavy schedule in New York, the highlight being Thursday night, when they both joined New York City's political elite at the Alfred E. Smith memorial dinner, a fundraiser for Catholic charities hosted by the Archbishop. Also on hand were New York's candidates in the Senate race: Hillary Clinton and Rick Lazio.

The Al Smith dinner, hosted by Archbishop Edward Egan, is a traditional forum for presidential candidates, although in past years, the abortion issue has kept some candidates away.

The event is named for the former New York governor who was the first Roman Catholic ever to be nominated for president.

The presidential candidates came well-armed with jokes, often poking fun at themselves.

Bush gazed around the diamond-studded $800-a-plate crowd and commented on the wealth on display.

"This is an impressive crowd - the haves and the have-mores," quipped the GOP standard-bearer. "Some people call you the elites; I call you my base."

Gore chose to allude to his debate style and the silliness of some political catch phrases, including one of his favorites: putting Social Security "in a lockbox."

"I'll put Medicaid in a walk-in closet," joked the vice president. "I will always keep lettuce in the crisper."

He brought down the house with another remark, about his strategy of using "real people" to illustrate policy points. Gore talked about a "woman who's here tonight, whose husband is about to lose his job. She's struggling to get out of public housing and get a job of her own. Hillary Clinton, I want to fight for you!"

Earlier Thursday, Gore focused on the economy in a speech to business leaders at Columbia University. Bush spent part of the day in Michigan before following Gore to New York. The Texas governor made it clear he doesn't believe Gore deserves credit for the prosperous economy.

Both camps hit the TV talk-show circuit in New York. Bush engaged in a surprisingly serious discussion of the issues in an appearance on The Late Show With David Letterman.

Bush admitted to Letterman that he had a low bar to clear in the presidential debates. "A lot of folks don't think I can string a sentence together, so when I was able to do so, it uh - Expectations were so low, all I had to do was say, 'Hi, I'm George W. Bush.' "

Gore made his time in New York count with Thursday tapings of talk show appearances with Regis Philbin, Rosie O'Donnell, followed by a Friday morning pitstop at The Today Show. Both the vice president and the Texas governor taped segments of Saturday Night Live, which will be aired on Nov. 5 as part of an election special.

During the taping of his SNL segmet, Bush walked out on the set as former cast member Dana Carvey - who impersonated Bush's father on the show many times - came out to greet him. Carvey revived that impersonation when he hugged George W. and said: "I love my son." The Texas governor made light of his mispronounciation of words, but actually had trouble with deliberately mangling the word "ambivalence."

In Gore's chat with Regis, the vice president recalled a prank he pulled on his wife, Tipper. Gore said he once lathered up his hair with shampoo, then he took a bottle of hair remover and asked her what it was - pretending to have used it. Gore said his wife was "already a little freaked out" about him losing his hair.

Talk show cameos aside, the two presidential candidates did some heavy hitting on the campaign trail.

"In 19 days, prosperity itself is on the ballot," said the vice president in speech at Columbia University emphasizing the economy. "Will we make the right choices and the right investments to keep our economy growing, or will we bust the budget and shortchange the future for a massive tax cut for the few?"

"Let's cut to the heart of the matter: both sides in this election have proposed targeted tax cuts," said Gore. "The difference is the Bush plan targets the wealthy...Governor Bush came right out and admitted it in Tuesday night's debate. My plan targets the middle class."

Bush ridiculed Gore's economic claims during a campaign stop early Thursday in Fraser, Mich., saying "some politicians want to take credit for the new economy, but I don't see government starting new companies, writing new software, inventing new technology, opening new factories. I've always thought those things were done by, well, the people who did them. Our new economy was not created in a Senate subcommittee or a vice presidential commission."

"Maybe if you've been in Washington too long, you lose your ability to count real money," Bush said. He repeated his own calculations, saying independent analysts confirm that the Social Security system will have a $2.4 trillion surplus over the next 10 years - more than enough to implement his plan.