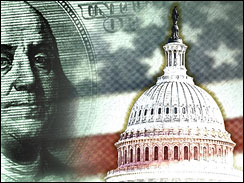 (AP)
With no fanfare and little notice, the national debt has grown by more than $4 trillion during George W. Bush's presidency.

It's the biggest increase under any president in U.S history.

The bailout plan now pending in Congress could add hundreds of billions of dollars to the national debt – though President Bush said this morning he expects that over time, "much if not all" of the bailout money "will be paid back."

But the government is taking no chances. Buried deep in the hundred pages of bailout legislation is a provision that would raise the statutory ceiling on the national debt to $11.315 trillion. It'll be the 7th time the debt limit has been raised during this administration. In fact it was just two months ago, on July 30, that President Bush signed the Housing and Economic Recovery Act, which contained a provision raising the debt ceiling to $10.615 trillion.

Deputy Press Secretary Tony Fratto declined an invitation to comment on the enormous jump in the national debt during Mr. Bush's presidency. He referred me to OMB – the Office of Management and Budget, which tried to make the case that as a percentage of the economy, the national debt is not that big.

In its budget documents in February, OMB estimated that next year's national debt would hit $10.4 trillion – which it said would amount to 69.3 percent of the gross domestic product – the standard measure of the size of the economy.

That's high – but far from an all-time high. After World War II, the national debt soared to over $270 billion – a quaint figure by today's standards. Numerically, it's less than the amount of federal deficit we now run up in a single year. But back in 1946, the Debt amounted to 121.7 percent of the size of the total economy.

By the time Richard Nixon began his second term in 1973, the national debt had grown to $466 billion – though as percentage of GDP, it had fallen to 35.7 percent.

Today, OMB press secretary Corinne Hirsch, renewed the oft-made government argument that reporters should focus on just that part of the national debt that is held by the public – now about $5.6 trillion and not include that portion billed as "intra-governmental holdings" – money the government owes itself – especially the Social Security and Medicare trust funds.

Of course, the government doesn't have that money either. It's been spent.

President Bush made that point himself on April 5, 2005, when he paid a visit to the offices of the Bureau of the Public Debt in Parkersburg, W.Va.

He was shown a white file cabinet with keypad locks on each of its four drawers in which the Social Security Trust Fund is stored. On that day, there was no cash – as he noted in a speech later in the day.

"There is no 'trust fund,' just IOUs that I saw firsthand, that future generations will pay – will pay for either in higher taxes, or reduced benefits, or cuts to other critical government programs," he told an audience at West Virginia University.

The government didn't have the money it owed itself back then – and still doesn't.

A couple of weeks after he took office, President Bush addressed the Republican Congressional Retreat in Williamsburg and declared that his budget "pays down the national debt."