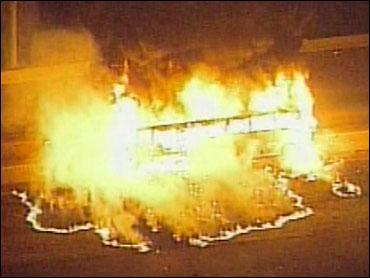 "We believe there were 43 souls on the bus" when it left the Houston area, Dallas County Sheriff's spokesman Sgt. Don Peritz told CBS radio station KRLD. "Deputies were unable to get everyone off the bus" because of a series of explosions, possibly from elderly patients' oxygen tanks.

"This is a tragic, tragic accident," Peritz added.

Peritz would not give the name of the facility from which the patients were evacuated.

"Some of them didn't survive," nurse Juanita Palacios, who was in another car and helped get the passengers off the bus, told KRLD. "A lot of them have mental illness or physical illness, or they're paralyzed."

The bus was engulfed in flames, causing a 17-mile backup on Interstate 45 that was already congested with evacuees from the Gulf Coast. The bus was reduced to a blackened, burned-out shell, surrounded by numerous police cars and ambulances.

Bodies from the bus were covered with blue tarps by the side of the road.

There were indications that oxygen used by elderly evacuees could have had a role in the fire, Peritz said. There were a series of explosions, apparently from the oxygen equipment, he said.

"The early indications are this is a mechanical issue. The driver did survive the accident," Peritz said. "It's my understanding he went back on the bus several times to try to evacuate people."

The mechanical problem may have involved the bus' brakes.

Palacios said a passenger told her the bus had had a flat tire earlier, and had it replaced.

Interstate 45 stretches more than 250 miles from Galveston through Houston to Dallas. The crash site is roughly 17 miles southeast of downtown Dallas, just inside the county line.

The highway northbound was closed, but traffic was being diverted to a service road.