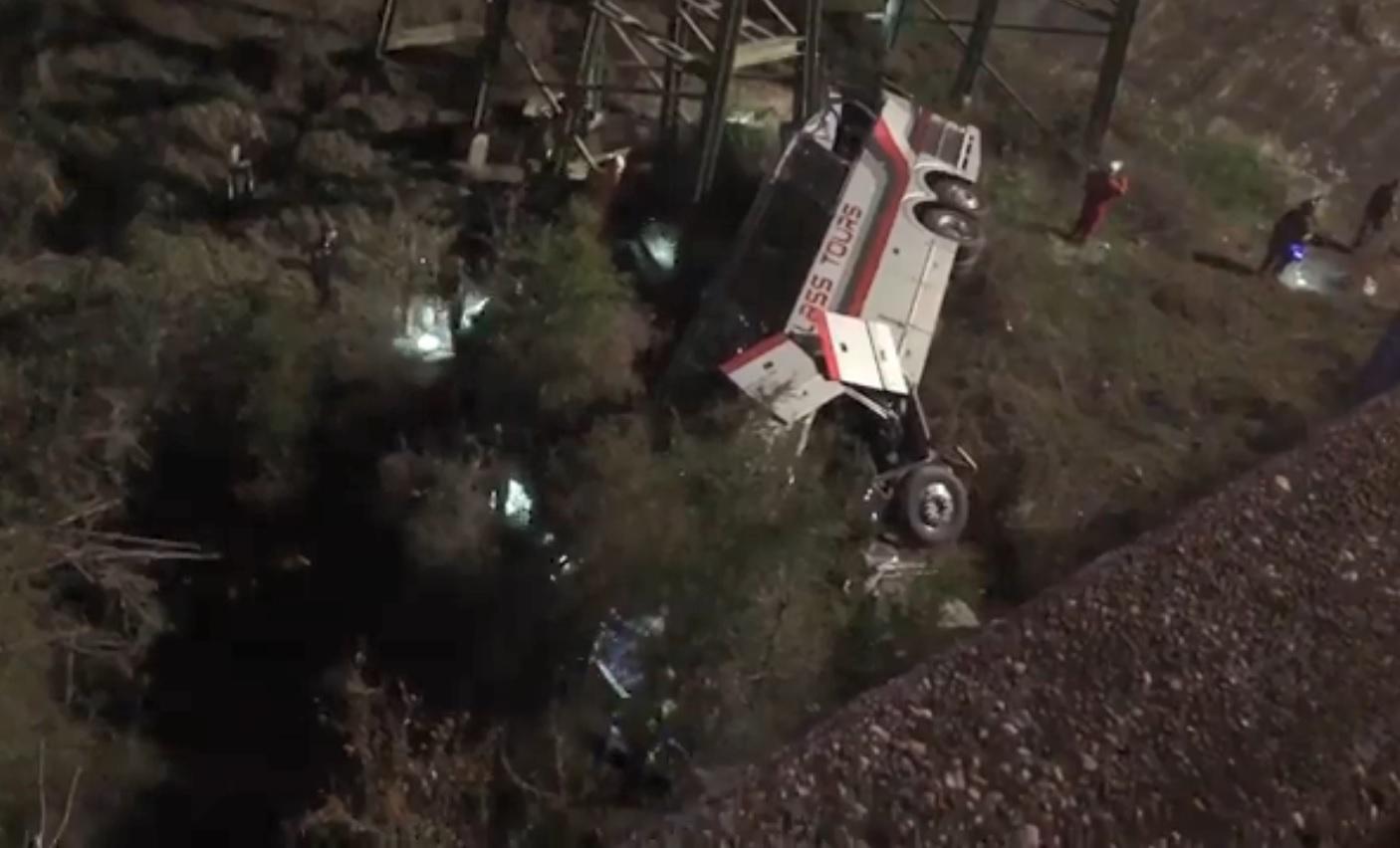 LOXLEY, Ala. -- A charter bus carrying high school students home to Houston, Texas from a high school band trip to Disney World plunged 50 feet down an Alabama ravine early Tuesday, and numerous children were taken by helicopters to emergency rooms. According to CBS News affiliate WKRG-TV, the bus driver, Harry Caligone, was killed in the crash.

"Harry was a long-time driver for our company and we are deeply saddened for this loss. We offer our heartfelt condolences to his family," First Class Tours, which owns the bus, said in a statement. "It is our understanding that there are additional injuries as a result of the accident. Our prayers are with the injured and their families at this time. We pledge our assistance in cooperating with local authorities in the investigation."

According to safety records, the bus company has been involved in four crashes in the last two years, according to WKRG-TV.

One person was hospitalized in critical condition and five others were listed in serious condition, Baldwin County Sheriff's officials said. The other victims are being treated for non-life threatening injuries.

"At this time, we have been able to confirm that 40 students and 6 adults from Channelview were on the bus at the time of the accident. We are aware of numerous injuries," the Channelview Independent School District said in a statement.

"First and foremost, our thoughts and prayers go out to our students, employees and families that have been affected by this tragedy," the school district said. "We are now focused on getting everyone back safely to our community. We are extremely grateful for the first responders, hospital employees and volunteers from churches and schools in Alabama and Florida that have stepped up to help our students and comfort them through this difficult situation."

According to WKRG-TV, a deputy suffered minor injuries while pulling people from the bus.

"We have multiple injuries; the bus went down into a ravine," said Chris Elliott, a Baldwin County commissioner who helped out at the county emergency management center following the crash. "The fire department and officers are having to rappel down into the area to get into it."

Helicopters and ambulances took the injured to three hospitals in Mobile and Pensacola, Florida, plus a free-standing emergency room in rural Baldwin County, Elliott said.

"Everybody is being transferred to a hospital to at least be checked out," said Elliott.

Students who were aboard the bus described moments of terror.

"I woke up and the band director who was not driving was screaming," DeWayne Benson said. "I felt bumps then one huge bump and everything went black."

Another student, Bianca Torres flew over four rows of seats but walked away with only a bruised knee. Her brother Josh, who was also on the trip, was traveling on another bus and said the family tried frantically to get Bianca on the phone after the crash.

"We were feeling hopeless, we thought our sister had died," he said.

Friends and relatives posted about the school band trip on social media. One image showing happy band members at Disney World was posted only hours before the crash.

Texas Gov. Greg Abbott also released a statement in response to the crash.

"Cecilia and I are heartbroken by the news of this tragic accident, and we offer our prayers to all these young Texans and their families," Abbott wrote. "I pray for a speedy recovery for all those injured, and I am especially grateful for the heroic actions of the Alabama first responders that undoubtedly helped save lives today. Texas is prepared to offer any assistance necessary as we rally around the entire Channelview High School community during this difficult time."