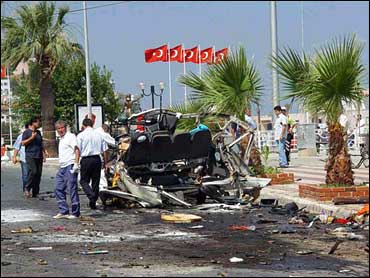 The blast in the coastal city of Kusadasi, a favorite destination for British, Irish and German tourists, reduced the bus to a scorched, twisted heap of metal.

A man's charred body was shown in news photos draped over the remains of a seat and an injured woman lay on the road, just a few yards from the beach. Civilians rushed to the bus after the attack and carried the injured away from the burning wreckage.

Police boosted security in the town, searching cars as they entered and patrolling the town's center with dogs.

Nobody claimed responsibility for the attack. Kurdish rebels have carried out bombings in Aegean resort towns but a Kurdish rebel commander, Zubeyir Aydar, condemned Saturday's explosion in a statement to the Germany-based Mezopotamya News Agency. The statement could not be verified.

Leftist and Islamic militants also are active in the country, a member of NATO and one of Washington's most important Muslim allies.

Police initially said a female suicide bomber carried out the attack after a woman's torso was found on the bus, indicating she had been carrying the bomb. But authorities later said explosives had been planted on the bus and more evidence was pointing toward a bombing rather than a suicide attack.

One British citizen was killed and five were wounded, the British Foreign Office said, another blow to Britain after the July 7 bus and subway bombings in London that killed more than 50 people.

Separately, a regional governor said an Irish tourist and two Turks were killed in the blast in Kusadasi, 45 miles south of the port city of Izmir.

The British and Irish foreign ministers condemned the bombing.

The attack — the second to hit a resort town in under a week — caused alarm in Turkey's lucrative tourist industry, which had expected to welcome more than 20 million visitors this year and take in some $19.5 billion, a 50 percent increase over revenues in 2004.

"This incident at the height of the tourism season has seriously saddened us," the Anatolia news agency quoted Kaya as saying.

Angry shop owners tried to block some television news crews from filming the scene of the attack, apparently afraid that images of the blast would discourage tourists.

Last Sunday, a bomb hidden in a soda can wounded 21 people, including three foreign tourists, in the resort town Cesme, north of Kusadasi. On April 30, a bomb in a cassette player killed a police officer and wounded four other people in Kusadasi.

The Kurdistan Freedom Falcons Organization claimed responsibility for those bombings, warning that it would keep up attacks against tourist areas.

The Falcons are believed to be hard-liners linked to the Kurdistan Workers Party, or PKK. It was not clear now how closely they coordinate with the the PKK leadership, which is based in the mountains of northern Iraq.

Irish Foreign Minister Dermot Ahern said he was "deeply shocked by this cruel and senseless act."

In London, Foreign Secretary Jack Straw said Britain stood "shoulder to shoulder with the people of Turkey, in sympathy and in our refusal to allow terrorists to destroy our values and our liberty."

In November 2003, terrorist attacks in Istanbul against the British Consulate-General and the local headquarters of London-based bank HSBC killed 58 people and wounded hundreds.

Speaking shortly after Saturday's explosion, Prime Minister Recep Tayyip Erdogan said Turkey was taking anti-terror measures, but added that "it is not possible to stop it 100 percent, no matter how strict security measures you take."