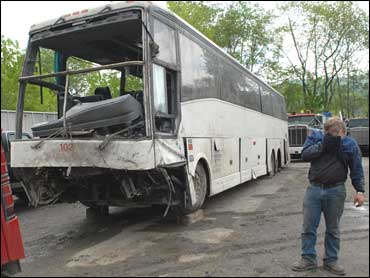 State police say the bus was on its way from Youngstown, Ohio, to New York City when it crashed on Interstate 80 near Clearfield at about 3:30 a.m. It's unclear what caused the accident or if other vehicles were involved.

A spokeswoman at Clearfield Hospital says doctors there treated passengers ranging in age from a toddler to a 50-year-old, with injuries including lung and abdominal wounds, and various abrasions and lacerations.

Nine people were taken to Altoona Hospital, where two were listed in serious condition and seven were in guarded condition.

State police in Clearfield have scheduled a news conference for Sunday afternoon.