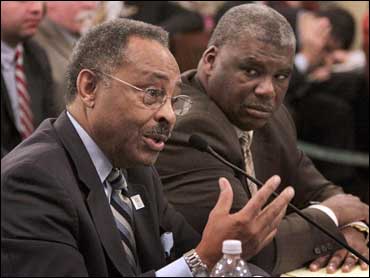 U.S. Senate appointee Roland Burris testified Thursday that he didn't strike any agreement with Gov. Rod Blagojevich to win the plum position, and said he's never been involved in an improper deal in his two decades in government.

His testimony under oath was one of the key requirements Senate Democrats set out for Burris as a condition to accept his appointment, who initially had balked at any choice by the scandal-clouded Blagojevich.

"I can before this committee state that there was nothing ... legal, personal, or political exchanged for my appointment to this seat," Burris told an Illinois House committee investigating whether to impeach the governor.

But Burris declined to answer questions about whether he would have gone to federal authorities if he'd been offered such a deal. He also declined to say whether Blagojevich should resign or be impeached, saying he has no control over those issues.

The governor picked Burris to fill President-elect Barack Obama's vacant Senate seat after being arrested on federal charges that include allegations he schemed to sell the seat to the highest bidder.

Burris, 71, said Thursday he didn't talk to Blagojevich about the Senate seat before the arrest, though he said he expressed interest to some "close friends" and Lon Monk, a former top aide to the governor.

Burris said he had been discussing consulting work with Monk when he said: "Lon, I'm interested in that that Senate seat and I think you've got access to the governor, so just let him know that I'm interested."

The House committee was voting Thursday on whether to accept a report that said the Democratic governor had abused his power and recommended he be impeached by the full House. If accepted, it would set up an impeachment vote by the House on Friday.

Earlier this week, Burris was turned away in the rain when he went to the Washington, D.C., to be sworn in.

It wasn't long before Democrats began their hasty retreat, bowing to pressure from Obama and other Democrats that the dispute was damaging to the party.

Democratic leaders said they didn't plan to comment about the hearing Thursday.

Obama had spoken to Senate Majority Leader Harry Reid on Monday about the importance of quickly resolving the standoff, according to Democratic officials. Reid was told by Obama that if Burris had the legal standing to be seated, it should be done "sooner rather than later," said an Obama transition aide, speaking on condition of anonymity because the conversation was private.

The dispute had taken on racial overtones after comments by some supporters of Burris, who would be the Senate's only black member following Obama's departure.

On Wednesday, the day after Burris was turned away from the Capitol, he was invited in to meet with Reid and the No. 2 Senate Democrat, Dick Durbin of Illinois.

Later, Reid and Durbin said they thought highly of Burris and they were merely waiting for procedural matters to be resolved before he could be seated.

Burris still hasn't taken the oath of office to join the newest members of the 111th Congress. He has said he should be able to join the Senate "very shortly."

Senate leaders have said they also are waiting on the Illinois Supreme Court to rule on whether Illinois Secretary of State Jesse White must sign Burris' certification to comply with Senate rules.

Finally, the Senate would almost certainly vote on whether to seat Burris, Reid said.