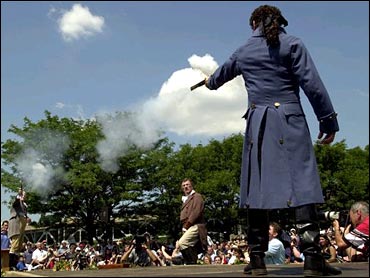 The bitter grudge between their ancestors has long faded, but on Sunday descendants of Alexander Hamilton and Aaron Burr marked their paces with pistols in hand.

Antonio Burr, a descendant of Burr's cousin, arrived by rowboat in period costume and fired a replica of the .54-caliber pistol that mortally wounded Hamilton 200 years ago in the July 11, 1804 duel.

Ohioan Douglas Hamilton, a fifth-great-grandson of Hamilton, feigned the historic hip wound, dropping to one knee and then falling to the ground in a sitting position.

The event was the families' first meeting in two centuries.

"It wasn't something on my top 100 list, but it was nice to meet Antonio Burr," Douglas Hamilton said afterward. "He seems to be a very nice man, though I'm not sure I'm going to be on his Christmas card list."

Still, Douglas Hamilton noted his famous ancestor had forgiven Aaron Burr on his deathbed and so could he.

"Just being shot 31 hours earlier, if he could forgive Burr, far be it for me not to honor that," said Hamilton, an IBM salesman from suburban Columbus, Ohio.

More than 1,000 people attended the re-enactment near the Hudson River. The original duel's exact site is unknown because the waterfront area is so dramatically different than it was 200 years ago, historians said Sunday.

An estimated 60 descendants of Hamilton attended the event, as did 40 members of the Aaron Burr Association.

Hamilton, a signer of the Constitution and the nation's first treasury secretary, had a simmering feud with his longtime rival Burr, the vice president under Thomas Jefferson.

Even today, some relatives question how the feud between the two began.

"There was an animosity on the part of Alexander Hamilton toward Aaron Burr for which there was nothing in Aaron Burr's record that could be justified," Antonio Burr, a psychologist from New York, said Sunday.

When Burr ran for governor of New York in early 1804, Hamilton denounced him as untrustworthy. Burr lost. Burr later complained about a newspaper article that reported Hamilton had expressed a "despicable opinion" of him.

Dissatisfied with Hamilton's explanation, Burr, then the sitting vice president, challenged him to the duel.

Shot by Burr, Hamilton returned to New York, where he died the next day. Burr was indicted on murder charges in New York and New Jersey but was never tried, and finished his term as vice president in 1805.

After Sunday's highly orchestrated event, Douglas Hamilton and Antonio Burr and their families headed to Hamilton Park where two new plaques honoring Burr and Hamilton were to be dedicated.