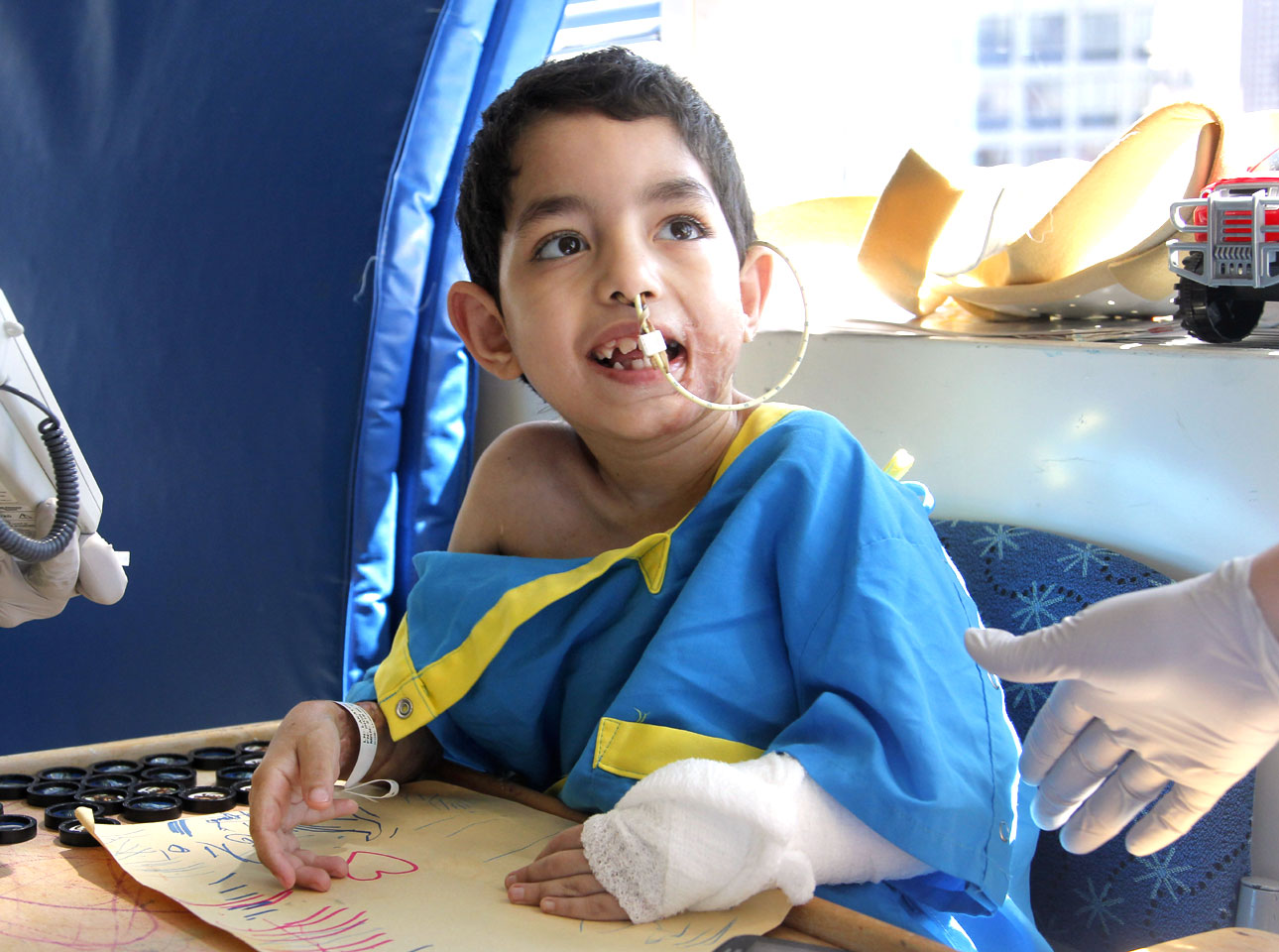 (AP) BOSTON - Not much is known about how Ihor Lakatosh ended up with burns over 30 percent of his body.

The little Ukrainian boy was severely malnourished and unable to walk or bend his arms when neighbors in Lviv, Ukraine, urged his mother to take him to a hospital about a year ago. She did, and never came back.

Now, Ihor is being treated at Boston's Shriners Hospital for Children, where he faces months of surgeries.

Plastic surgeon Dr. Daniel Driscoll and anesthesiologist Dr. Gennadiy Fuzaylov brought Ihor to Shriners through their nonprofit organization. They believe he may be able to walk again after multiple surgeries and extensive physical therapy.

"He has a huge desire to live," Fuzaylov said. "You can just look at his eyes and see that."

He was burned four years ago, maybe five.

Doctors say it's clear he didn't receive proper treatment for his burns, likely caused by flames.

Ihor's skin contracted as the burns healed, limiting movement of his knees and elbows. He hasn't walked since the fire.

Ihor likely held his left arm to his chest, protecting it, so it fused to his torso as it healed, Driscoll said.

His mother is an alcoholic; no one seems to know who his father is.

The hospital in Lviv provided minor care but couldn't pay for extensive treatment of Ihor, who was placed in an orphanage after his mother left him at the hospital.

"He was in a completely debilitating condition, and the doctor refused to operate on him because he's in an orphanage," said Fuzaylov, who grew up in the former Soviet Union.

The hospital staff figured Ihor was mentally impaired and took him to a special orphanage that houses kids with cerebral palsy. But doctors in Boston said he's fine mentally. They said Ihor never attended school and didn't know how to hold a pencil.

The orphanage director contacted a Ukrainian burn physician, who contacted Fuzaylov and sent him a photo of the boy.

With the help of Fuzaylov and Driscoll's nonprofit, Doctors Collaborating to Help Children, Ihor arrived at Shriners on Aug. 10.

Shriners-Boston is part of a network of 22 nonprofit hospitals across North America that provide free care to children with burns, orthopedic conditions, cleft lips and spinal cord injuries. The Boston hospital specializes in severe burns.

During Ihor's first week in Boston, doctor's separated his arm from his body in a 30-minute procedure.

A week later, the team completed a skin graft surgery to cover the gaping wounds left behind.

The temperature in the operating room quickly climbed toward 95 degrees Fahrenheit (35 degrees Celsius) to keep Ihor's body temperature up while so much of his body was exposed and his skin, which regulates heat, was removed.

Driscoll's assistant removed a thin, 10-inch (25-centimeter) strip of skin from Ihor's back. The team cut the skin and slid it through a skin mesher, perforating and doubling its size.

Driscoll stapled the skin to Ihor's side and arm wound, using allograph, or cadaver skin, for the last section just below his wrist.

"The surgery itself is relatively simple but it can have a lot of bleeding ... and it's extremely painful after the surgery," Driscoll said, noting the grafted skin is fragile and prone to infection.

One week later, the graft has taken better than expected, he said. Doctors replaced the allograph with more of Ihor's skin and snipped the webbed skin behind his knee to eventually allow it to move.

With extensive physical therapy, Ihor will likely be able to walk, bend his arms and possibly have full range of motion.

"Once he gets the release of that leg, he'll be unstoppable," occupational therapist Katie Hartigan said.

Ihor may spend two more months at Shriners, where the team will address the most urgent aspects of his care, and then their Ukrainian colleagues could continue it.

He likely will return to Ukraine and the orphanage eventually.

For now, Ihor charms and plays with the hospital staff.

Hartigan helps him do simple tasks with his left arm - coloring, waving, brushing his teeth with his electronic Sponge Bob toothbrush.

"He, even now, will get into doing something and be like, 'Look! I have two hands,'" Hartigan said.

She and Ihor chatter to each other, even though they don't speak the same language.

"I love you," Hartigan said, cupping his chin in her hand. "You are so stinking cute."

Ihor said through an interpreter that he wants to treat sick people when he grows up. He put on a surgical mask, hairnet and gloves and mimed bossing everyone around.

"I want to be a doctor," Ihor said, playing with his teddy bear as a translator relayed his message.

"I will be a doctor. Do you realize that?"