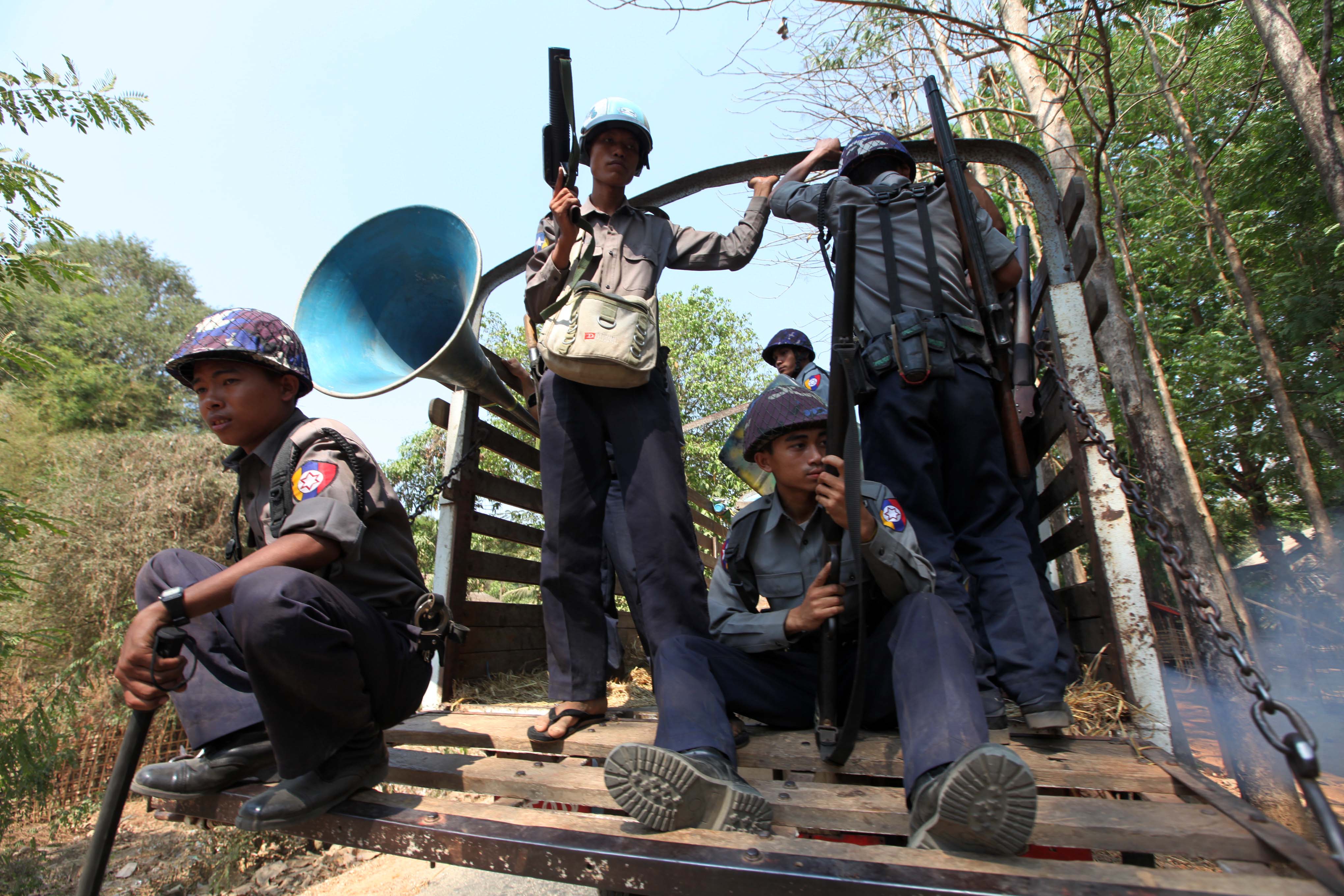 YANGON, Burma Burmese President Thein Sein said that his government will use force if necessary to quell deadly religious rioting that started last week, as attacks on Muslims by Buddhist mobs continued in several towns.

In his first public comments on the violence, Thein Sein warned in a televised speech Thursday that he would make all legal efforts to stop "political opportunists and religious extremists" trying to sow hatred between faiths.

Police announced Thursday that 42 people have been killed, 37 religious buildings and 1,227 houses have been damaged or destroyed, and 68 arrests have been made in the three affected regions since the recent unrest started on March 20.

The violence began with rioting by Buddhists targeting minority Muslims in the central city of Meikhtila that drove about 12,000 people from their homes. It spread this week to several towns in the Bago region, about 100 miles north of the country's biggest city, Yangon. One incident was reported near Naypyitaw, the capital.

Curfews and bans on public gatherings have been imposed in the affected areas, but state television reported that groups of people attacked houses, shops and religious buildings on Thursday in two towns in Bago. On Wednesday, it reported that security forces fired shots into the air to break up attacks, which residents said targeted Muslim properties.

"In general, I do not endorse the use of force to solve problems. However, I will not hesitate to use force as a last resort to protect the lives and safeguard the property of the general public," said Thein Sein, who took office in 2011 as part of an elected civilian government after almost five decades of repressive military rule.

By instituting democratic changes and economic liberalization, he has built a reputation as a reformer and restored relations with Western nations that had shunned the previous military regime for its poor human rights record.

"We must expect these conflicts and difficulties to arise during our period of democratic transition," he said in a 10-minute speech. "As we rebuild our society, we must rise above 60 years of historical bitterness, confrontational approaches and a zero-sum attitude in solving our differences."

Burma, also known as Myanmar, became independent from Britain in 1948, but suffered from instability because of tensions between various ethnic minorities. Parliamentary government proved fractious, and was ended by a military coup in 1962.

Occasional isolated violence involving majority Buddhists and minority Muslims has occurred for decades, even under the authoritarian military governments that ruled the country from 1962 to 2011. But tensions have heightened since last year when hundreds of people were killed and more than 100,000 made homeless in violence in western Burma between ethnic Rakhine Buddhists and Muslim Rohingya.

Tomas Ojea Quintana, the U.N. special rapporteur on human rights in Burma, welcomed Thein Sein's public call for the violence to stop but said authorities "need to do much more" to keep the violence from spreading and undermining the reform process.

"The government has simply not done enough to address the spread of discrimination and prejudice against Muslim communities," Quintana said in a statement. He also called on the government to look into allegations that soldiers and police stood by "while atrocities have been committed before their very eyes, including by well-organized ultra-nationalist Buddhist mobs."

U.S. State Department spokeswoman Victoria Nuland praised Thein Sein's call for tolerance and religious pluralism, saying they were messages that his country needed to hear. She also noted the Burmese leader said force would only be used as a last resort.

"We underscore that security measures should protect human rights not violate them," Nuland told reporters in Washington.

Thein Sein called on police to "perform their duties decisively, bravely" and according to the law. Police in Meikhtila had been criticized for failing to act quickly and decisively against the rioting, in which mostly Muslim-owned houses, shops and mosques were burned down. He said the military, called out after two days to restore order, also played "a meaningful role in safeguarding property and the rehabilitation of victims."

The violence in Meikhtila was sparked by a dispute between a Muslim gold shop owner and his Buddhist customers, and escalated after reports spread of a Buddhist monk being killed by a Muslim mob. Thein Sein said he was "deeply saddened to find out that a simple private dispute led to a deadly riot and that some unruly instigators, taking advantage of the disingenuousness of the public, tried to spread the riots to other parts of the country."

He did not specify who might have been behind the unrest.

Thein Sein said authorities "did not resort to the use of force immediately, mainly because we do not want to let anything happen to our ongoing democratic transition and reform efforts."

The scale and persistence of the violence has led to speculation that it may have been organized rather than spontaneous. Theories about the culprits abound, from hard-core military elements who want to turn back from democracy, to radical Buddhist monks, some of whom have been outspoken in denouncing the Rohingya Muslims as dangerous foreigners. A newly unshackled press has sometimes spread intolerant messages, which also get transmitted through social media on the Internet.