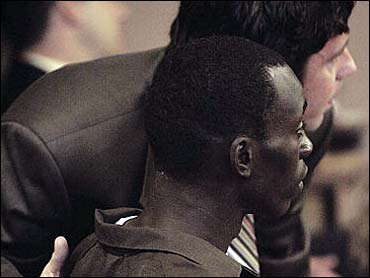 The last thing she remembers before being entombed in a trash bin under rocks and concrete blocks was looking into the eyes of the man who had left her there to die.

The 8-year-old remained trapped there for hours, sleeping intermittently, wondering if anyone would find her. Then she heard muffled voices growing closer and the lid being lifted from the bin. She managed to wiggle her fingers — a sign of life that brought elated cries from above.

The girl, who was found by police seven hours after she was reported missing early Sunday, was hospitalized in good condition Monday and was talking with family and friends. After she was rescued, she described her attacker to police, leading to the quick arrest of a teenage boy who had been staying at her godmother's home.

"She said the last thing she remembers is that he looked over her with these big eyes and then she said she went to sleep. She said she was waiting for us to find her," said 18-year-old Danielle Holloman, a family friend who recounted the girl's story.

"She said she knew we would come get her. That's why as soon as the police came, she wiggled her fingers," Holloman said Monday.

Police Sgt. Mike Hall found the girl after climbing into a 25-foot-long trash bin and opening the lid to a 30-gallon recycling container. Inside, he saw the girl's hand and foot peeking out amid heavy concrete slabs.

Rescuers feared the worst, but the mood turned jubilant when they saw the girl's fingers move and realized she was alive.

"There's no doubt in my mind that this child would have been dead if he didn't find her. She was dehydrated and in rough shape with pieces of cement blocks on top of her and she was face down," Sgt. Dan Boland said. "There was no way for her to get out on her own."

He said there must have been enough air pockets in the container to keep her alive.

Her disappearance rattled a state that had been outraged over the arrests of sex offenders in the separate killings earlier this year of 9-year-old Jessica Lunsford and 13-year-old Sarah Lunde.

The girl had been staying overnight at her godmother's house in this town about 10 miles south of West Palm Beach — where she often stayed on weekends when her mother worked.

Authorities said Milagro Cunningham, 17, confessed and was charged with attempted murder, sexual battery on a child under 12, and false imprisonment of a victim under age 13, police said.

The teen initially told investigators that the girl may have been abducted by five men in a station wagon and that he followed them but they got away. His story then unraveled under questioning, Boland said.

Holloman said Cunningham's mother lives in the Bahamas and he had been staying with an aunt until she accused him of stealing and kicked him out about four months ago. He then went to live at the home of Lisa Taylor, Holloman's mother and the girl's godmother.

"He was a good person. He would clean and do chores, laugh and play jokes and stuff. We never thought he would do something like that," Holloman said. "The only reason I can think he went crazy like this is his father died and his mother didn't want him. Nobody wanted him."

The teen has a relatively minor criminal record, authorities said. He was on probation for throwing a rock through a car window.

The girl vanished from the bedroom she was sharing with Holloman's 1-year-old son. Her disappearance was discovered when Holloman and Taylor's other teenage daughter came home after a night of roller-skating, authorities said.

A half-hour later, Cunningham knocked on the door and the sisters found him with his shirt torn and his clothes covered with dirt. Investigators said that was when he started telling his story about the men in the station wagon.

"We believed him. We all believed him because we never thought he would do something like that," Holloman said.

After an Amber Alert was issued, neighbors poked holes in the boy's account and the attention began to focus on him. He initially said there were five attackers, then four and later two.

"When somebody tells you a story, sometimes things just don't add up and once you get deeper into it, the holes get bigger and bigger," Boland said.

Authorities said the girl was found far enough from any homes that no one would probably have heard if she had cried out. The trash bin was in a fenced-off former landfill behind a park where she often played with friends.

The Associated Press and CBSNews.com do not identify alleged victims of sexual assault.