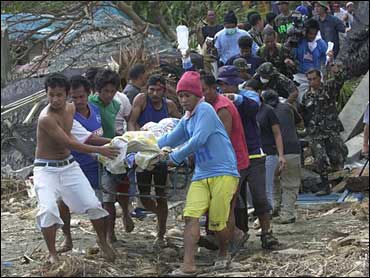 Maria Tamares constantly feared the tiny, pitch-black crevice under tons of mud and logs would be her grave — and that of her 3-year-old granddaughter and three others trapped for 10 days under storm-loosened rubble.

One person died beside Tamares, pleading for water. The dirty trickle that at first found its way through the cracks quickly dried up, forcing the survivors to lick the ground and a moist concrete slab.

Then, just when death seemed imminent, they heard tapping above them and yelled for help.

In a rescue seen by many as a miracle, soldiers and villagers pulled Tamares, her granddaughter and two neighbors from the debris Thursday of a two-story building buried under landslides unleashed by fierce wind and rain.

A back-to-back storm and typhoon raged through the northeastern Philippines last week, killing at least 842 people.

The discovery of the 49-year-old Tamares and the other stunned survivors — all severely dehydrated but suffering only minor bruises — stirred hope that others of the more than 750 missing could be found alive.

"We prayed and prayed and prayed. We felt like we were entombed between heaven and earth," Tamares said by telephone from her hospital bed in Lucena, where the survivors were brought by helicopter after being extricated from the rubble in the town of Real, 40 miles east of Manila.

"There was nothing but darkness, no food, but droplets of water, and I thought our time had come," said Tamares, sobbing as she recalled the ordeal.

The nightmare started Nov. 29 when howling winds and flash floods triggered mudslides that pounded her home, forcing Tamares to dash outside with one of her two granddaughters, Estella Marie Sor.

Tamares' daughter took another granddaughter elsewhere and both died in the storm, she said.

Tamares sought refuge with dozens of others in a roadside building between a hill and the sea.

But mudslides brought logs and other debris crashing down on the concrete building, burying those inside.

Tamares, her granddaughter, a male relative in his 60s and two male neighbors were trapped in an air pocket, a space so cramped they could only lie on their backs. They initially used a pot to collect water dripping through cracks.

The water soon dried up and they were forced to wet their lips by licking moisture from the ground and a concrete beam. Tamares' relative died beside her after three days. His decaying body filled the dark void with an unimaginable stench, she said.

"We turned to our side from time to time because our backs began to hurt. We relieved ourselves while lying down without taking off our clothes because the cramped space did not allow much movement," she said. "We drank our urine."

When the limited air made breathing difficult, Tamares said, she lost hope and asked God to take care of them in death. "My granddaughter, the two others pleaded for me not to harbor thoughts of death," she said. "They said 'God will guide us out of here.'"

Then the unbelievable happened.

"We heard some pounding above us and we yelled, 'Help us! Help us! We're alive in here!' and they found us," she said. "It was a miracle. Thank God, he gave us a second life."

The military said in a statement that soldiers and miners removing decomposing bodies from the rubble heard the desperate calls. They used a backhoe to break a hole in a concrete slab, and found Tamares and the others.

The crowd of rescuers burst into applause as the emaciated survivors were pulled out.

As Tamares lay on a warm, dry blanket beside the hole, a woman dabbed her lips with wet cotton. Surrounded by a frenzy of celebration, she managed to smile, tears streaming down her face.