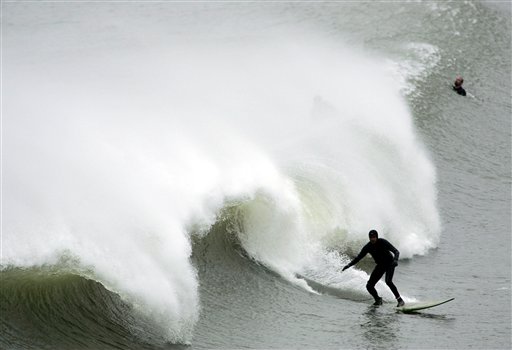 CHICAGO -- At the midpoint of the season, Michael Jordan is proud of his Chicago Bulls, even if they haven't been able to match their own lofty standards.

Despite playing without All-Star Scottie Pippen for the first 35 games, the two-time defending NBA champions lead the Eastern Conference with a 29-12 record and expect to return to their dominant ways soon.

"I don't think we should sit around and pat ourselves on the back because we're not to the caliber of basketball that we were last year at this stage," Jordan said Wednesday night after scoring 33 points in 31 minutes to lead Chicago to a 110-79 victory over the Charlotte Hornets.

"We should be striving for a better record, but under the circumstances we have to be pleased with where we are."

The Bulls, who were 36-5 and 38-3 midway through the previous two seasons, are 1½ games ahead of Indiana.

They outrebounded Charlotte 45-43 even though they were without flu-stricken Dennis Rodman, the league leader in that category for the seventh successive season. Rodman is the latest in a series of players to be knocked out by sickness, and the Bulls are still without injured 3-point specialist Steve Kerr.

"We've been able to muster our way through to this point, and I think we're due to put together a winning streak ... that can distance us from the rest of the pack," Chicago coach Phil Jackson said.

"It's a challenge to finish off the rest of this time before the All-Star break with one loss (in the remaining eight games) ... so other people have to chase us and we have some breathing room."

Pippen had 14 points and seven assists as Chicago won its 17th consecutive game at the United Center to push its league-best home record to 21-1.

David Wesley had 18 points for the Hornets, but was 1-for-8 with four turnovers in the first half as the Bulls took a big lead they never relinquished. Glen Rice finished 4-of-18 for 10 points - 12 below his average.

"Normally when I catch and shoot I go straight up, but I was very hesitant tonight," Rice said. "I've just got to be more aggressive and not think about it."

In losing for the fourth time in five games, Charlotte shot 38 percent and committed 20 turnovers that led to 29 Chicago points.

"We need structure," said the Hornets' Anthony Mason, seemingly taking a shot at coach Dave Cowens. "We change it all, we flip it around. (The Bulls) are a great team; they play it one way. We can't change our game plan in every game."

It was the Bulls' most decisive victory and the Hornets' most lopsided defeat this season.

Jordan repeatedly took advantage of his matchup with Corey Beck. He went 14-for-23 from the floor and now has 10,524 career field goals, moving past John Havlicek into fifth place on the NBA career list.

Averaging 35.2 points over the last 14 games as he guns for his 10th scoring title, Jordan had nine points as the Bulls closed the third quarter with a 22-10 run after Charlotte had pulled to 5850.

"When Dennis is in there, he gets the ball," Longley said. ``Tonight, I focused on getting the ball instead of just taking care of bodies underneath."

The Hornets, who were without injured Vlade Divac and Dell Curry, are 8-33 against the Bulls since joining league in 1988.

Notes: The crowd went wild as the Bulls approached the 111-point level necessary for all in attendance to get free tacos. "It's surprising to me that people can pay 60 dollars for a seat and get such a thrill out of a 99 cent taco," Jackson said. ... Rice re-entered the game with 1:41 to play so he could hit a 3-pointer and extend his double-digit scoring streak to 118 games. ... Since Charlotte defeated Chicago 79-77 on Dec. 12, the Bulls are 17-3 and the Hornets are 10-10. ... The Bulls are 13-0 when they score 100 points. ... After Beck was called for a foul that resulted in a three-point play for Jordan, Mason turned to referee Greg Willard and said: "No matter what you do, when you go home tonight, watch that one play on the highlights."