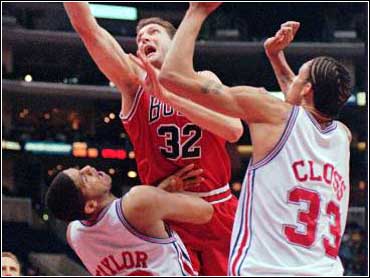 The last time Elton Brand and Lamar Odom played together on a basketball court was in high school. Now the stakes are much higher.

"I didn't want to make this into a personal matchup," Brand said. "I just wanted to come out here, play my game and get a win. It wasn't myself versus Lamar, or No. 1 versus No. 4, or whatever. People try to make it into the rookie-of-the-year race, but I wasn't interested in all that."

The game marked the first-ever meeting in the pros between Brand, the top pick in the NBA draft, and Odom, the fourth overall pick. Odom was the rookie of the month in November and Brand earned the honors in January.

Brand was 8-for-11 from the field and grabbed eight rebounds in 33 minutes. Odom had two rebounds in 26 minutes, getting his only points on a dunk with 8:51 left in the first quarter and a hook shot about two minutes later.

"The matchup situation that they were playing worked out for them, I guess," Odom said. "They guarded me with someone who wasn't even six-foot tall and shut me down. I couldn't post Randy Brown up or get position on him. He did a good defensive job."

Toni Kukoc had 20 points, 10 assists and seven rebounds for the Bulls, who delt the Clippers their fourth straight loss and 18th in 20 games. Maurice Taylor scored 23 points and Troy Hudson added 19 off the bench for Los Angeles.

Brand ignited a 14-2 run with a slam dunk and capped it with a short jumper, as the Bulls turned a three-point deficit into a 66-57 lead with 2:55 left in the third quarter.

"Personally, I think I'm progressing well," said Brand, who is averaging 21 points and almost 10 rebounds per game. "I'm not pacing myself, but I'm not hitting the wall, either. I come into every game with a lot of energy, and I'm playing well."

The Bulls maintained their nine-point margin through the end of the period before the Clippers reduced it to 83-77 on consecutive layups by Hudson and Taylor, followed by Taylor's 17-footer with 5:41 remaining.

But Los Angeles never got closer, as Kukoc sealed the win for Chicago with four free throws and a slam dunk in the final 3@1/2 minutes.

The Bulls hit 12 of their first 17 shots in the second quarter, trimming a 16-point deficit to 45-44 with 1:07 left in the half. Kukoc fueled a 19-6 run with 10 points in a span of 3 1-2 minutes, including a short hook shot that capped the rally. Rookie Ron Artest's slam dunk one minute into the third quarter gave the Bulls a 50-49 lead, their first since Artest's game-opening layup.

Michael Olowokandi, who didn't make more than five field goals in any of his previous eight games, shot 5-for-6 in the first quarter alone to help Los Angeles take a 29-13 lead. But he finished with only 12 points.

The Clippers forced 10 turnovers in the period en route to their second-best defensive quarter of the season, and connected on 10 of their first 13 shots.

"When we miss our shots and don't get the rebounds, teams start running on us and we can't defend that," Kukoc said. "But when we get in a half-court game, we do much better. So we tried to make it a halfcourt game in the second quarter, and that's when we were able to come back."