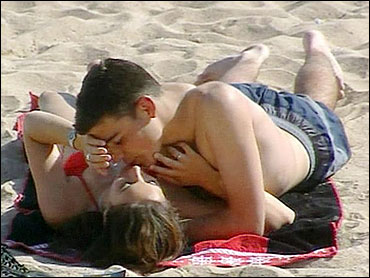 The two scored all but two of Chicago's points in the fourth quarter as the Bulls stopped yapping at each other and started looking like a championship team again as they defeated the Utah Jazz 93-88.

"People were talking about our age, about playing too many minutes, whatever. But we're here, we beat some good teams to get here," Jordan said. "If that's what it means to be dead, I want to be dead for a while longer."

Aside from a strong first half by Toni Kukoc, the Bulls didn't get much help from anyone other than Pippen and Jordan. But they had enough offensive rebounds and defensive stops, and the Jazz got too little offense from Karl Malone.

The Jazz also were hurt by a long drought in the fourth quarter. They scored just one point in the first six minutes of the period, which began with them ahead 73-70. It was the first time in 60 games that they lost after carrying a lead into the fourth.

"They were the aggressors all night," Utah coach Jerry Sloan said. "That is a great defensive team. They're very good, very quick. This is a rhythm team, and they created a rhythm for their offense and kept it for almost the entire game."

They avoided falling behind 0-2 in a series for the first time since 1994 and will have a chance to hand the Jazz their first consecutive losses this season with John Stockton in the lineup.

Jordan finished with 37 points, including 13 in the fourth, Pippen had 21 and Kukoc scored all 13 of his in the first half. The Bulls grabbed 18 offensive rebounds twice their total from Game 1

and scored 33 points off Utah's 20 turnovers.

Most important of all, the Bulls closed the game with a strong flourish and did something to debunk the theory that they have forgotten how to finish.

That line of thinking, along with the short fuses and quick tempers that were on display in Game 1 the byproducts of the expected end of the team's decade-long run had people thinking that Chicago might not be able to beat a Jazz team that showed superior depth and precision in Game 1.

Instead, the Bulls did enough in the final few minutes to head back to Chicago in a whole new frame of mind.

"I forced myself to say I'm going to enjoy this moment, this last dance or whatever. I was taking it too serious," Jordan said. "It may not happen again. I should enjoy it, and that's my mood from now on."

Utah had a 12-4 run, ending with a 3-pointer by Jeff Hornacek with 1:46 left for an 86-85 lead.
With the crowd chanting "Beat the Bulls," Chicago missed two shots and Utah rebounded, but Stockton threw a bad pass that was picked off by Kukoc. Steve Kerr missed an open 3-pointer but grabbed his own rebound, feeding Jordan for a layup. He was fouled on the play, and his free throw made it 88-86.

Malone missed a 20-footer with the shot clock running down, and Rodman rebounded with 25 seconds left. Kerr then made two foul shots, making it 90-86.

The Jazz threw away the ensuing inbounds pass their 20th turnover of the night and Jordan made a free throw with 14.5 seconds left.

All the Jazz could do after that was heave up a pair of 3-pointers, and they wouldn't have done much good even if they went in. A tip-in by Morris made it 91-88 with 3.7 seconds left, and Jordan finished the scoring from the line with 1.7 left.

The crowd had already started filing out, and the elation this city felt after the Jazz's overtime victory in Game 1 had evaporated.

Jordan shot 14-for-33 from the field and 9-for-10 from the line, Pippen was 7-of-13 and Kukoc was 6-for-16. Dennis Rodman grabbed nine rebounds, including five on the offensive end to help Chicago score 19 second-chance points.

Hornacek had 20 points to lead the Jazz, who got only four second-half points from Malone as he finished with 16 on 5-for-16 shooting. In Game 1 he was 9-for-25, scoring 21 points.

"I don't know if I'm content to be more perimeter oriented, they just did a great job," Malone said. "A lot depends on how I play, and I haven't played well the first two games."

"If I don't play well, we don't win the series. The worst thing for me to do right now is put the whole weight of the team on my shoulders. It's only been two games."

Malone had four turnovers and Stockton, Hornacek, Bryon Russell and Howard Eisley had three each.

Utah went 7-for-13 on 3-pointers after going 0-for-8 in Game 1, but the sharp shooting was negated by the sloppiness the Jazz showed throughout the game.

The Bulls' bench started contributing in the second quarter, with 3-pointers by Scott Burrell and Kerr along with one by Kukoc helping Chicago open a 46-39 lead with 2@1/2 minutes left.

The calls and non-calls really started going Chicago's way over the rest of the half. Jordan drew a chippy touch foul, then knocked Hornacek over as he backed his way in. No call was made as Hornacek fell on his back, but the whistle blew after Hornacek knocked the ball out of Jordan's hands.

Replays showed a clean steal, and the crowd was livid as Jordan sank two free throws. They got even more steamed on Utah's next trip downcourt when Malone fell hard to the floor and nothing was called.

When the first half ended with Chicgo ahead 50-46, the refs were the target of even more abuse as they walked to their locker room.