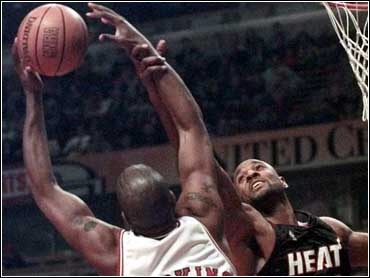 Playing their first game without Toni Kukoc, the Chicago Bulls got big nights from Elton Brand and Hersey Hawkins and put together one of their best defensive efforts of the season Thursday night as they stunned the Miami Heat 83-76.

"This was a real big win for us for many reasons, including the mental health of our team," coach Tim Floyd said. "With Toni gone, we needed to show we could win without him, especially against a team like Miami."

Brand, the No. 1 pick in last year's draft, led the Bulls with 26 points and 10 rebounds. Hawkins, who had only scored in double figures once in the 13 games since he returned from the injured list, had 20 points and a season-high nine rebounds.

Chris Carr added a season-high 16, including six during a key stretch in the third quarter.

Chicago, which might actually be a better team defensively without Kukoc, held the Heat to 41 percent from the floor and their second-lowest point total of the season. The Bulls also outrebounded Miami 47-40.

Alonzo Mourning led Miami with 15 points and 11 rebounds, but he was well below his season average of 22.6 points. Tim Hardaway had 14, and Jamal Mashburn added 12 points.

The Heat got within 60-59 with 8:15 left on a layup by Chris Carter, but Brand made two free throws and Hawkins drilled a short jumper and a 3-pointer to ut the Bulls back up 70-59. After that, all that was left was the celebrating.

It was the second straight victory over Miami, owner of the second-best record (31-18) in the Eastern Conference, by the Bulls, the NBA's worst team (11-38).

"It's not devastating," Miami coach Pat Riley said. "The Bulls have one of the worst records in the league, but one of the best defenses."

Defense or no defense, Chicago's already dim fortunes looked even worse when Kukoc, the team's leading scorer and the last key piece of the championship dynasty, was traded to Philadelphia on Wednesday. When he missed 24 games with lingering back spasms earlier this season, the Bulls went 2-22 and flirted with the NBA record for futility.

With Kukoc gone for good, would Chicago win another game?

"The confidence level wasn't good, especially at shootaround with Toni saying his goodbyes," Hawkins admitted. "Walking into the training room, it was as if somebody died it was so quiet. But like coach told us, `You can put your heads down and mail the rest of the season in or go out there and play like men."'

Chicago looked lost for much of the first quarter, scoring just two field goals in the last 4:15 as Miami took a 23-16 lead. But the Bulls opened the second quarter with a 12-3 run, and back-to-back 3-pointers by Matt Maloney and Hawkins, followed by Brand's dunk, gave them a 28-26 lead.

Any time the Heat seemed on the verge of pulling away, the Bulls came up with an answer. When P.J. Brown's jumper gave Miami a 44-39 lead, Hawkins responded with a 3-pointer. When Hardaway hit a 3-pointer, Carr scored six straight points to pull Chicago within one at 49-48.

The Bulls took the lead on a three-point play from Brand, and he and Maloney each made a pair of free throws to give the Bulls a 55-53 lead at the start of the fourth quarter.

"It's a huge boost because of the trade," Brand said. "Before the game, coach came to me personally and said, `I need a big night from you. A reporter or someone said we're only going to win two more games. Let's get one of those tonight.'

"I guess we got one of the two wins."