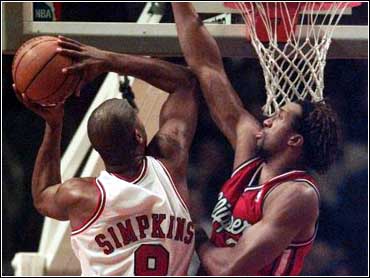 Chris Carr hit a 3-pointer with 27 seconds left, and Will Perdue made his only free throw of the game 13 seconds later to seal the Chicago Bulls' 74-72 victory over the Los Angeles Clippers on Saturday night in a matchup of the NBA's worst teams.

Eric Piatkowski tipped in Michael Olowokandi's miss with 5.8 seconds to go, but the Clippers dropped the inbounds pass on their next possession and Troy Hudson missed a long 3-pointer at the buzzer.

The loss gives the Clippers the dubious distinction of fewest victories (11) and worst winning percentage (.208) in the league. It also spoiled the bench debut of Hall of Famer Kareem Abdul-Jabbar, the Clippers' newest assistant coach.

Despite the victory, the Bulls won't look back on this one with pride. They shot just 10 percent yes, you read that correctly in the third quarter, and tied the NBA season-low with 28.6 percent for the game.

But when a team is barely in the double digits with victories, they'll take every one they can get. Carr led the Bulls with a season-high 19 points and Hersey Hawkins added 14. Elton Brand had another double-double, grabbing 18 rebounds to go with his 13 points.

Troy Hudson tied his career high with 22 points, and Lamar Odom added 19 for the Clippers.

After trailing by as much as 11 in the third quarter, the Bulls tied it at 63 on a 3-pointer from Hawkins and two free throws from Carr with 4:36 left in the game. The Clippers pulled ahead three times only to ave the Bulls answer right back.

Finally, with 44 seconds left, Hudson made the second of two free throws to give the Clippers a 70-69 lead. After a timeout, Brand took a short jumper, missed, grabbed his own rebound and then kicked out to Carr on the right wing for the 3.

Hudson missed a jumper and Perdue grabbed the rebound and was fouled. Perdue, who missed his first five free throws, made the second shot to make it 73-70.

Had the Bulls been playing anyone but the Clippers, they probably wouldn't have been around to make a comeback. The Bulls made only two of their 20 shots in the third, while the Clippers went on an 11-0 run and took a 53-42 lead with 7:35 left.

But the Bulls were saved all night by their free throws. They went to the line 27 more times than the Clippers (40-13) and made 23 shots. They were 9-of-11 in the third quarter, including Ron Artest's two with 7.5 seconds left that kept Chicago within 58-54.