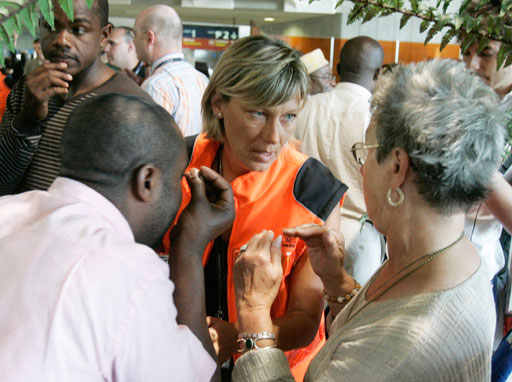 Every large commercial plane flying in the United States will have bulletproof cockpit doors by next week, but airline security experts say the design doesn't provide the best possible protection against a hijacker entering.

The Federal Aviation Administration requires that cockpit doors be locked during flight, according to agency spokesman Les Dorr. But there are times when a pilot may open the door — to visually check wing surfaces, use the bathroom and change flight crews during a long trip.

That leaves the possibility the cockpit could be rushed by a hijacker.

"It's a barrier when it's closed, it's an entry when it's open," said Capt. Steve Luckey, chairman of the Air Line Pilots Association's national security committee.

The need to open cockpit doors was one reason pilots lobbied for guns in the cockpit, Luckey said. Under a test program, about 48 pilots will be begin training to carry weapons while flying commercial passenger planes this month. Thousands more could be carrying weapons by the end of the year.

Luckey would like to see another safety measure — a Kevlar curtain that acts as a secondary barrier when the cockpit door is opened. He said the curtain would delay a terrorist long enough for passengers to attack him. Luckey wants Congress to order all planes to have it.

Israel's national airline, El Al, has among the most stringent security requirements. All its planes have double doors separated by a narrow hallway, said Offer Einav, former security director for the airline. Pilots must close one door before opening the other, he said.

That might not work for U.S. planes, Einav said: The narrow-body planes used for most domestic U.S. flights can't accommodate a double-door system, and there's a matter of stringency.

In the months after the terror attacks, airlines reinforces the existing cockpit doors with metal bars. But last year an unruly passenger on a flight from Miami to Buenos Aires managed to kick in a small breakaway panel across the bottom of the door and put his head into the cockpit before a co-pilot clubbed him with an ax.

The airline industry was given until this Wednesday to install the new doors in every passenger aircraft with 20 or more seats. FAA spokesman Greg Martin said the deadline will be met.

The new door withstands bullets and small explosives and can resist a force equivalent to an NFL linebacker hitting it at Olympic sprinter speed, said Jim Proulx, The Boeing Co. spokesman.

Boeing has delivered 4,300 kits that include the new doors, which airlines' regular maintenance crews can install, Proulx said. Boeing and its supplier designed 31 different door configurations for 18 aircraft models.

Airbus Industrie has delivered 557 kits to U.S. operators and about 1,800 worldwide.

One reason it's taken a year-and-a-half to install the doors, Proulx said, is that the company had to do basic research into materials and stress analysis, which cut into time that could have been used for design.

Congress gave domestic airlines $100 million for the doors, which amounts to about $13,000 per aircraft — far less than the $30,000 to $50,000 the FAA estimates they actually cost. Airlines are lobbying Congress for more money to pay the difference.

The Senate voted on Thursday to directly reimburse the airlines for the cost of the doors, while the House proposed giving airlines cash to pay for new security costs. The issue is likely to be resolved next week.

Foreign airlines authorized to operate in the United States also have to install the reinforced doors. Wanda Warner, spokeswoman for the International Air Transport Association, said she expects them to meet the deadline.

The International Civil Aviation Organization, the United Nations' aviation arm, is requiring every airliner in the world to install reinforced cockpit doors by Nov. 1.

The association estimates it will cost airlines $2 billion to comply with the directive. The U.S. government won't reimburse foreign airlines for the cost.

A megaflood could bring over 8 feet of water to parts of California
Thanks for reading CBS NEWS.
Create your free account or log in
for more features.
View CBS News In
CBS News App Open
Chrome Safari Continue
Be the first to know
Get browser notifications for breaking news, live events, and exclusive reporting.