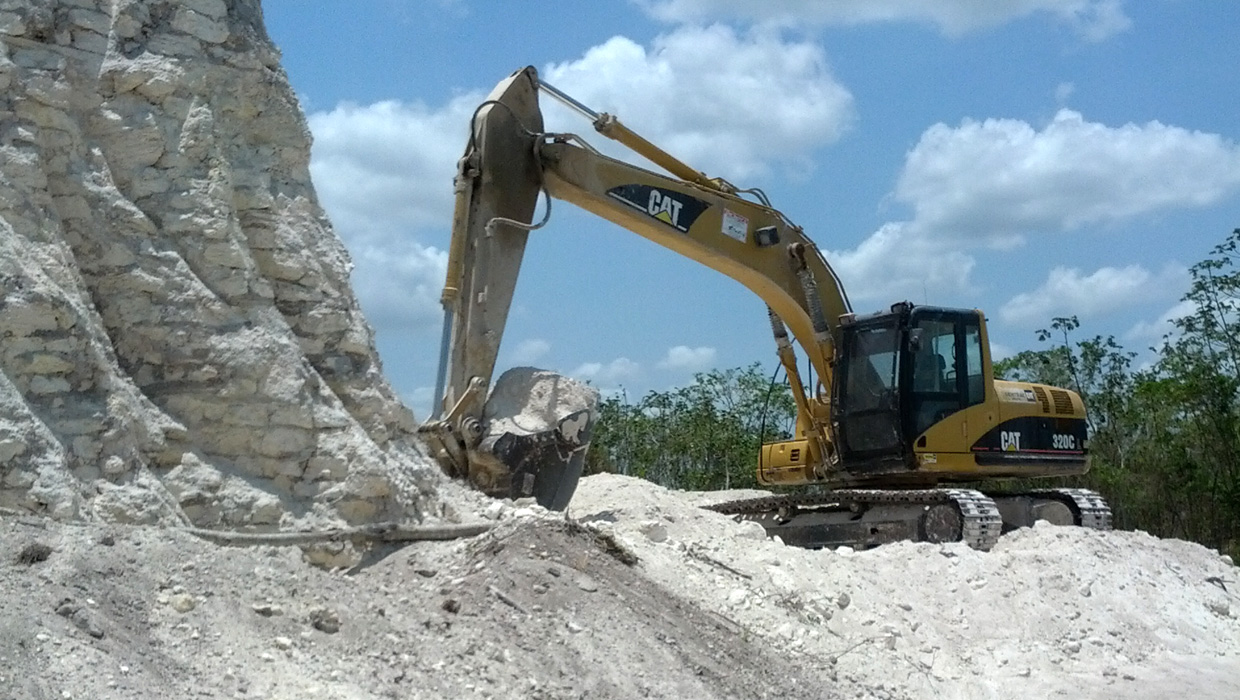 BELIZE CITY A construction company has essentially destroyed one of Belize's largest Mayan pyramids with backhoes and bulldozers to extract crushed rock for a road-building project, authorities announced on Monday.

The head of the Belize Institute of Archaeology, Jaime Awe, said the destruction at the Nohmul complex in northern Belize was detected late last week. The ceremonial center dates back at least 2,300 years and is the most important site in northern Belize, near the border with Mexico.

"It's a feeling of Incredible disbelief because of the ignorance and the insensitivity ... they were using this for road fill," Awe said. "It's like being punched in the stomach, it's just so horrendous."

Nohmul sat in the middle of a privately owned sugar cane field, and lacked the even stone sides frequently seen in reconstructed or better-preserved pyramids. But Awe said the builders could not possibly have mistaken the pyramid mound, which is about 100 feet tall, for a natural hill because the ruins were well-known and the landscape there is naturally flat.

"These guys knew that this was an ancient structure. It's just bloody laziness", Awe said.

Photos from the scene showed backhoes clawing away at the pyramid's sloping sides, leaving an isolated core of limestone cobbles at the center, with what appears to be a narrow Mayan chamber dangling above one clawed-out section.

"Just to realize that the ancient Maya acquired all this building material to erect these buildings, using nothing more than stone tools and quarried the stone, and carried this material on their heads, using tump lines," said Awe. "To think that today we have modern equipment, that you can go and excavate in a quarry anywhere, but that this company would completely disregard that and completely destroyed this building. Why can't these people just go and quarry somewhere that has no cultural significance? It's mind-boggling."

Belizean police said they are conducting an investigation and criminal charges are possible. The Nohmul complex sits on private land, but Belizean law says that any pre-Hispanic ruins are under government protection.

The Belize community-action group Citizens Organized for Liberty Through Action called the destruction of the archaeological site "an obscene example of disrespect for the environment and history."

It is not the first time it's happened in Belize, a country of about 350,000 people that is largely covered in jungle and dotted with hundreds of Mayan ruin sites, though few as large as Nohmul.

Norman Hammond, an emeritus professor of archaeology at Boston University who worked in Belizean research projects in the 1980s, wrote in an email that "bulldozing Maya mounds for road fill is an endemic problem in Belize (the whole of the San Estevan center has gone, both of the major pyramids at Louisville, other structures at Nohmul, many smaller sites), but this sounds like the biggest yet."

Arlen Chase, chairman of the Department of Anthropology at the University of Central Florida, said, "Archaeologists are disturbed when such things occur, but there is only a very limited infrastructure in Belize that can be applied to cultural heritage management."

"Unfortunately, they (destruction of sites) are all too common, but not usually in the center of a large Maya site," Chase wrote.

He said there had probably still been much to learn from the site. "A great deal of archaeology was undertaken at Nohmul in the '70s and '80s, but this only sampled a small part of this large center."

Belize isn't the only place where the handiwork of the far-flung and enormously prolific Maya builders is being destroyed. The ancient Mayas spread across southeastern Mexico and through Guatemala, Honduras and Belize.

"I don't think I am exaggerating if I say that every day a Maya mound is being destroyed for construction in one of the countries where the Maya lived," wrote Francisco Estrada-Belli, a professor at Tulane University's Anthropology Department.

"Unfortunately, this destruction of our heritage is irreversible but many don't take it seriously," he added. "The only way to stop it is by showing that it is a major crime and people can and will go to jail for it."

Robert Rosenswig, an archaeologist at the State University of New York at Albany, described the difficult and heartbreaking work of trying to salvage information at the nearby site of San Estevan following similar destruction around 2005.

"Bulldozing damage at San Estevan is extensive and the site is littered with Classic period potsherds," he wrote in an academic paper describing the scene. "We spent a number of days at the beginning of the 2005 season trying to figure out the extent of the damage .... after scratching our heads for many days, a bulldozer showed up and we realized that what appear to be mounds, when overgrown with chest-high vegetation, are actually recently bulldozed garbage piles."

However small the compensation, bulldozing pyramids is one very brutal way of revealing the inner cores of the structures, which were often built up in periodic stages of construction.

"The one advantage of this massive destruction, to the core site, is that the remains of early domestic activity are now visible on the surface," Rosenswig wrote.