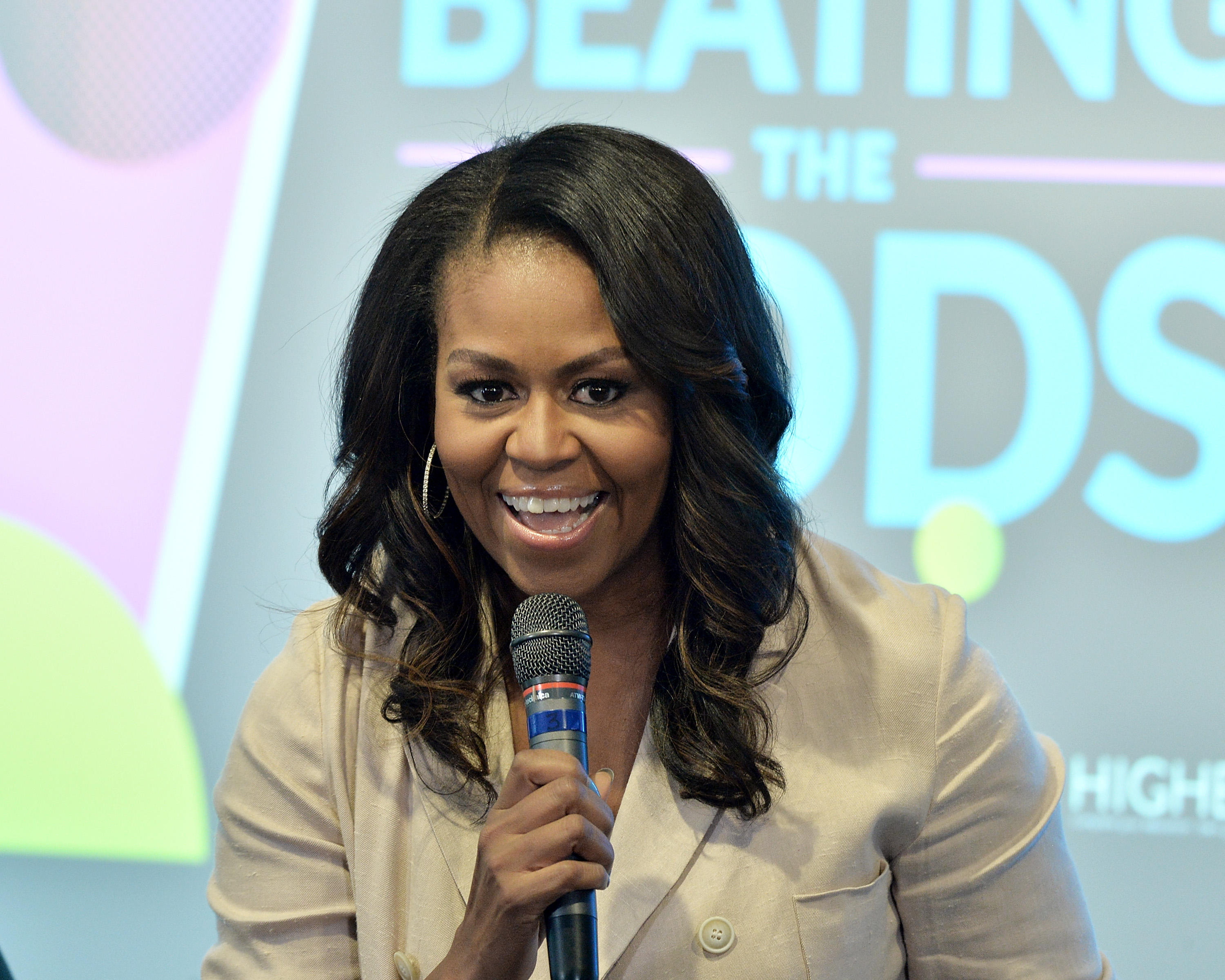 Former First Lady Michelle Obama recounted her undergraduate experience at Princeton University to a crowd of students Thursday, calling it an "out of body" experience. "I wouldn't have put myself in the category of Ivy League Schools. I didn't even know what an Ivy League school was, so stepping on campus for the first months or so, it was odd," Obama said.

Obama took questions from a crowd of about 45 students at Twitter's Washington, D.C., offices during the fifth annual "Beating the Odds" summit of Reach Higher, the former First Lady's initiative to encourage every student in America to pursue higher education. The summit was the first of a new partnership between Reach Higher and Handshake, a college career network.

A first-generation student hailing from the South Side of Chicago, Obama told students that they were "going to be fine" because she had been in their shoes when she joined Princeton University's class of 1985. Moving to the East Coast was a "culture shock" for her, she said, recalling the image of several of her predominately white and wealthy classmates moving onto campus in limousines.

"It took a second to kind of adapt to just the culture of the place, and my assumption is that a lot of you are going to experience that," she said.

She advised students to build a network of friends and support groups on campus to avoid feelings of isolation in a new environment, emphasizing that college is the "best idea."

"Find a community for yourself, you know, whether that's through sports or it's a cultural organization or a minority student group," Obama said. "Finding a cohort for yourself and starting to build your community is going to be important."

Obama discussed her own experience of being a minority student on campus, saying that there were people who told her she did not "belong" at Princeton.

"They were wrong," she said. "They didn't know me. They didn't really know what they were talking about...and you can do that too. You will do that too. But don't do it alone."

Obama also urged students to take initiative in their new worlds of what she called "mini-adulthood" whether that meant introducing themselves to faculty, attending campus lecture series, or taking care of their mental health.

Along with mental health, Obama reminded students to exercise, one of the former First Lady's pet causes. Obama has been known for her rigorous workout routines and Let's Move initiative during her time in the White House.

"Develop a routine for yourself. Exercise and how you eat is important," Obama said. "Have a vegetable, eat a salad, I'm serious y'all."

The Reach Higher initiative, founded in 2014, was created around the former President Barack Obama's "North Star" goal that by 2020, America will have the highest proportion of college graduates in the world. According to the Organisation for Economic Co-operation and Development, the United States was ranked 10th as of January 2017 for graduation rates among all 35 OECD countries.

Eric Waldo, the Executive Director of Reach Higher since its inception in 2014, said that, with today's economy, "some education past high school has to be the goal for every young person." Waldo said that the Reach Higher movement has extended the Obamas' tenure in the White House, calling the movement "critical in the face of not a lot of leadership" in the Trump administration.

"We are stepping into the absence," Waldo said.

Since the Obamas left the White House, Michelle Obama has been involved in Reach Higher events and programs, including 2000 "College Signing Days"—events for high school students to celebrate going to college—across all 50 states, Waldo said.

Students who attended this year's summit were motivated by Obama's advice, as they prepare to start college themselves next fall.

Mehkutha Whaley, a senior at Thurgood Marshall Academy preparing to attend Spelman College, said that listening to Obama helped to discuss "how college is a good thing, a necessary thing to get the success that I want."

"It was helpful for me to see where she's come from and where she is right now and how I can benefit from that," Whaley said.

Recent Spelman College graduate Breonna July remarked that the event was a very "humbling experience." July, a computer science major, recounted her experiences as a black woman in the technology field during her previous internship experiences, mentioning that she was often the only black person in the office.

But July added that seeing and listening to Obama propelled her to "continue doing what I'm going" and that "I deserve to be here" as she looks ahead to her post-graduate job at Microsoft in Dallas, Texas.

July will also be a panelist at the "Beating the Odds" summit to give advice to students gearing up for college and career opportunities.