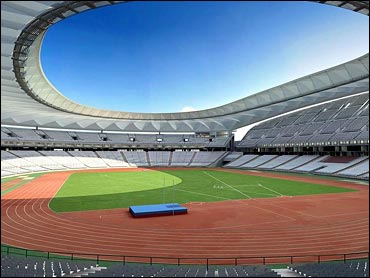 This column was written by James Thayer.

Even gangsters are more subtle. In Mario Puzo's The Godfather, consigliore Tom Hagen says, "You've got some labor trouble coming up."

Movie producer Jack Woltz demands, "You trying to muscle me?"

"Absolutely not," Hagen replies smoothly. "I've come to ask a service for a friend."

The Seattle Supersonics have determined that their home, Key Arena ? last refurbished 10 years ago to the tune of $95 million ? is deficient. Only 45 percent of Key Arena's suites are rented, whereas in other cities the suites run at 90 percent to 100 percent capacity. Renovations are needed and new leases should be negotiated, the team believes. NBA Commissioner David Stern has said the Key Arena lease is the least favorable to a team in the NBA. The Sonics say they have lost $56 million since 2001. The city council and state legislators at first balked at jiggering taxes to help the Sonics.

So the team's principal owner, Howard Schultz, chairman of Starbucks Coffee Company, has begun reading from a well-thumbed script. "We've instructed [the team president] to look at alternatives," he said. "You don't have to be that smart to understand what that might mean."

It means moving the team, of course. Schultz threatens to take his ball and go home. Or to Kansas City, Anaheim, or San Jose, which have been sniffing around the Sonics lately.

So begins another round of the stadium shakedown, the racket where team owners wrest away public money for their private businesses. Threatened with losing a professional sports team, otherwise savvy politicians suddenly suffer spine-ectomies. Time and again the shakedown works.

Not too long ago the public would have scoffed at using taxpayer funds for a stadium. Princeton political scientist Michael Danielson writes, "Professional sports were . . . a product of the business ethos[.] Teams were privately owned; they were organized into private leagues; and they played in private ballparks." In 1950 all National League and all American League stadiums except one (Municipal Stadium in Cleveland) were privately owned. The legendary ballparks ? Fenway in Boston and Yankee Stadium in New York ? were built without taxpayer dollars. Raymond J. Keating, chief economist for the Small Business & Entrepreneurship Council, notes that Municipal Stadium ? often referred to as the Mistake by the Lake ? was funded in 1928 when voters approved a $2.5 million bond issue. But it wasn't until almost a half century later, with publicly-funded stadiums in Baltimore and Milwaukee that "the stadium hopping, city-hopping fuse that continues to burn brightly today," was lit, Keating says.

Burning is no longer a sufficient metaphor; gelding might be better. Witness the District of Columbia's recent attempt to lure Montreal's baseball team to the city. The mayor first offered $200 million in city assistance to finance a ballpark. Not enough. So $275 million was put on the table, then $300 million, then $340 million. In for a penny, in for a pound. The city is now issuing $535 million in bonds to build the stadium. A new estimate that the Nationals' stadium might cost $700 million generated hardly a squeak from the trampled and left-for-dead opponents of public financing.

Denver's Coors Field cost taxpayers $200 million ? out of a total construction cost of $215 million. Bank One Ballpark in Phoenix, now called Chase Field, cost $355 to build, of which Arizona taxpayers coughed up $238 million. The Seattle Mariners' Safeco Field cost $498 million, and the taxpayers picked up three-fourths of it, $372 million. The list goes on and on.

Maybe our imagination, but little else. University of Maryland professor Dennis Coates and University of Illinois associate professor Brad R. Humphreys studied the effects of pro sports on the economies of 37 cities, and concluded that "claims of large tangible economic benefits do not withstand scrutiny." They examined net benefits, those the city would not have received without the presence of the team.

They point out that not all spending on game day in and around the stadium is new spending. When fans spend money during an evening at the ballpark, they don't spend that money elsewhere, which is called the substitution effect. Coates and Humphreys write, "If the stadium simply displaces dollar-for-dollar spending that would have occurred otherwise, there are no net benefits generated." Raymond Keating puts it this way, "So, if no ballpark existed in a city, a family might go bowling, take in a concert, go to the movies, or undertake some other recreational activity." Coates and Humphreys say direct spending on tickets, souvenirs, and food is "highly substitutable for other entertainment."

Economists Robert Baade and Alan Sanderson studied 10 cities over a 35-year period, and concluded that spending on recreational activities was not increased when a pro sports team was in the city; instead, spending was realigned. Keating notes that Stanford economist Roger Noll has shown that most fans come from within a 20-mile radius of the stadium and so money spent at the stadium would have been spent on some other entertainment fairly nearby. Keating concludes, "In that light, government-subsidized stadiums tend, at best, to be a zero-sum endeavor, a shifting around of resources."

But what about jobs, all the waiters and ticket sellers and beer salesmen? Coates and Humphreys found that having a pro team in a city raises wages for hotel workers by $10 a year, but reduces wagers for workers in restaurants and bars. Further, a pro team "had a statistically significant negative impact on the retail and services sectors of the local economy." A city lost on average 1,924 jobs due to the presence of a pro team. "Our conclusion," Coates and Humphreys write, "and that of nearly all academic economists studying this issue, is that professional sports generally have little, if any, positive effect on a city's economy."

When arguing that a stadium will enhance the local economy, team owners and politicians do not address the effect of taxes, assuming that the capital is free, that it is ex nihilo, coming from nowhere. The deadening effects of the taxes are ignored. Keating says, "After all, the resources gobbled up by the government and spent on a stadium are not created out of thin air." Economist Edwin S. Mills at Northwestern University's Kellogg Graduate School of Management writes of the tax's negative multiplier, "Everybody who pays a dollar in taxes to support the facility must reduce his or her spending."

Smith College economist Andrew Zimbalist sums it up: "There are very few fields of economic research that produce unanimous agreement. Yet every independent economic analysis of the impact of stadiums has found no predictable positive effect on output or employment."

Of course, someone always profits from money shuffling, and in this case it's the owners. The main economic effect of publicly-subsidized stadiums is to dramatically increase the value of the teams, to the benefit of the owners. Financial World magazine studied increases in valuation of professional sports teams between 1991 and 1997. The value of baseball teams with new stadiums increased 79 percent in those years, while the value of teams without new stadiums rose only 11 percent; NFL teams with new stadiums appreciated 156 percent while teams getting by with old stadiums saw increases of 111 percent; NBA teams with new arenas saw their values rise by 70 percent, while teams without new courts rose 55 percent; in hockey it was 133 percent versus 105 percent.

Can stadiums be built without mulcting the taxpayer? Grant Gulibon at the Allegheny Institute for Public Policy and John Hood, president of the John Locke Foundation, note that St. Louis's Busch stadium was privately financed and is privately operated and has turned a profit every year since it opened. The taxpayer's sole contribution was a $6 million bond issue for nearby streets and sewers. The $200 million it cost to build the Wachovia Center, home of the Philadelphia Flyers and '76ers, came from private sources, with only $13 million from public funds for infrastructure improvements. Boston's Fleet Center, now called Banknorth Garden, home of the Bruins and Celtics, was privately financed. As were the home stadiums of the Carolina Panthers, the Chicago Bulls and Blackhawks, the Detroit Pistons, and many others.

Gulibon and Hood list ways owners can raise money for their new stadiums, including the sale of naming rights. The software company Corel, for instance, paid $25 million for naming rights to the Ottawa Senators' home rink (now called Scotiabank Place). Pre-selling luxury suites, premium seating, and advertising and concession rights also raises building funds. Dolphins Stadium near Miami cost about $115 million, most coming from the advance sale of executive-suite leases. Permanent seat licenses ? which give the fan the right to buy a seat forever ? raised $100 million of the $160 cost of the Carolina Panthers' stadium.

So private money exists, but why bother, when owners find it so easy to take it from the taxpayer under the rubric of economic revitalization and new jobs? Sounding more like the cigar chewing, Thompson-toting Rico Bandello (Edward G. Robinson in Little Caesar) than the sophisticated Tom Hagen, Sonics owner Howard Schultz tried to scare the wits out of Washington State politicians with his threat to move the team.

It worked. A bill has just been introduced to the Washington State legislature that would authorize King County to extend existing taxes now being used to pay off Safeco Field to pay for a $220 million refurbishing of the Sonics' Key Arena. The bill looks to pass.

Commentary: Why this is the "Trump shutdown"