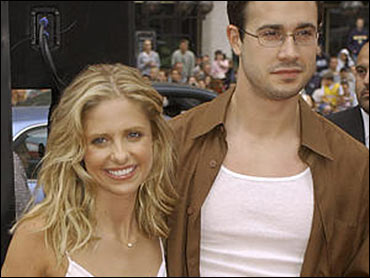 Stick a stake in it: "Buffy the Vampire Slayer" is done.

After seven years, the series will be over at the end of this season, said its star, Sarah Michelle Gellar.

"'Buffy' in this incarnation, is over," Gellar told Entertainment Weekly magazine for its March 7 issue, her eyes welling with tears.

The series will wrap up with a five-part story, which will include the return of Faith, the bad-girl slayer, and Buffy's first love, Angel.

"We're gearing up to tell a fabulous, huge, great arc," Gellar said. "It's going to be pretty spectacular."

But the show may come back to life in some form: Its creator, Joss Whedon, is planning a spin-off that may include some "Buffy" cast members. It will be pitched first to UPN, "Buffy's" home for the past two seasons; for five seasons before that, it was on the WB. [UPN and CBS are both owned by Viacom.]

Gellar, 25, gained fame on the cult hit as Buffy Summers, a perky high school student burdened with the responsibility of killing vampires in the seemingly idyllic town of Sunnydale, Calif.

Last summer, she co-starred with Freddie Prinze Jr., who's now her real-life husband, in a live-action movie version of "Scooby-Doo." A sequel is scheduled for release in March 2004.