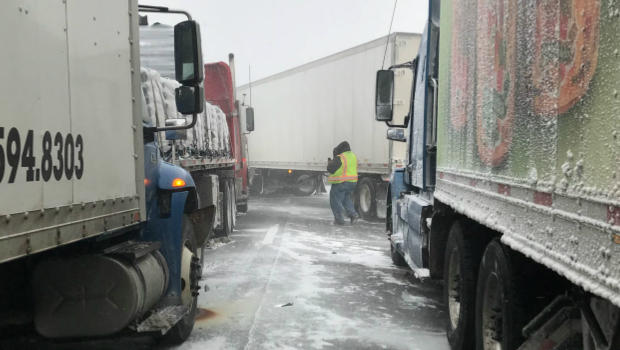 At least 75 vehicles were involved in a pileup on a highway near Buffalo, New York, on Tuesday, causing a huge traffic backup. The collisions happened on the eastbound portion of the New York State Thruway in Lancaster, CBS affiliate WIVB-TV reports.

Crews had to extract multiple people from vehicles and at least two people sustained very serious injuries -- including one critical -- but many were considered minor.

WIVB-TV writes that the I-90 eastbound is congested for several miles. Drivers are urged to avoid the thruway and use local streets.

Officials posted online that I-90 between exit 50 and 48A remains closed and that eastbound traffic is being diverted off of exit 50. Westbound traffic must exit 48A.

Video posted on social media by Kadire Flowers apparently shows the aftermath of the accident involving a variety of commuter cars and big rigs on the snow covered interstate.

A male passenger in the video is heard saying the incident was "freaking bonkers" as a never-ending line of vehicles are shown at a standstill.

Meanwhile, a winter storm will likely bring heavy snow to New England as well as dangerous, icy winds to other northeastern states later this week, according to CBS News weather producer David Parkinson. Temperatures will warm slightly Wednesday and Thursday ahead of a massive Atlantic storm system.