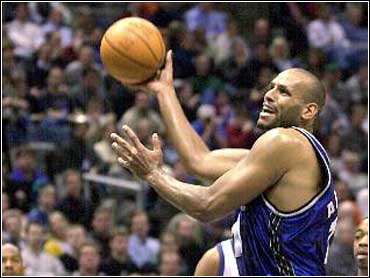 For the first time in over a month, fans in the Bradley Center were actually cheering when the Milwaukee Bucks left the court.

Ray Allen had 26 points and nine rebounds as the Bucks snapped their seven-game home losing streak Sunday with a 102-95 victory over the Orlando Magic.

"I'm just happy it's over," coach George Karl said. "We played a high quality of basketball in the second half. We're in good shape to have a solid March. We're definitely in the race."

With their potent offense finally back in rhythm, the Bucks snapped a five-game losing streak and won for just the second time in 10 games. The victory, and Milwaukee's solid performance, were long overdue for a team that slid from fourth to eighth place in the Eastern Conference in a precipitous three-week stretch.

"He starts out as a monkey, then he turns into a gorilla. In our case, he was King Kong," Allen said. "King Kong just fell off the building."

Orlando got a career-high 32 points from Pat Garrity, but he tired late and the Magic's losing streak reached five. Orlando finished a four-game road trip with losses to Seattle, Portland, Utah and Milwaukee.

"It's been a drag," Garrity said of the team's road woes. "With them struggling and the way they've been playing at home, and with them also being a team we're chasing, it's a shame we didn't win this one."

Milwaukee, which allows more points than any NBA team, also showed some defensive spark. The Bucks, who increased their lead over Orlando for the final conference playoff spot to 2 1/2 games, held the Magic scoreless for over 3 1/2 minutes late in the fourth quarter.

The Bucks made a 9-0 run during that span to break open a close game and actually draw cheers from the Bradley Center crowd, who has booed the Bucks heavily during te losing streak. Sam Cassell added 22 points for Milwaukee.

Tim Thomas, who had 17 points, hit six free throws in the final minute to seal the win. Thomas then ruffled Karl's hair in a ritual post-victory gesture that hadn't been needed for quite a while.

"I think everybody was upset this week," Thomas said. "It all built up, and finally it came out."

Orlando's only consistent offensive weapon was Garrity, whose 20 first-half points came entirely on jump shots and two free throws. Garrity finished 12-of-17 from the field, but his shots began missing as his legs tired from 37 minutes of play.

"I had a couple of ridiculous shots go in, but mostly I just had good open looks," Garrity said. "I was able to take my time."

Orlando coach Doc Rivers wasn't pleased with the result, but he couldn't fault his team's effort.

"I don't know if you can get closer to a playoff-type atmosphere as far as the way the two teams were going at each other," Rivers said. "It was a game that both teams played desperately, played hard and scrappy."

To shake up his sleepwalking team, Karl activated journeyman Darvin Ham from the injured list and put him in the starting lineup in place of Scott Williams. Ham played 30 minutes and had five points and seven rebounds, including a thunderous rebound dunk in the second quarter.

But Karl may have benched the wrong starting forward. Glenn Robinson, who made his first All-Star team earlier this month, continued his slump with just 14 points and another poor defensive game against Garrity and Ron Mercer, who had 13 points.

Milwaukee avoided going through the entire month of February without winning at home. The Bucks have had just four winless home months in their history.