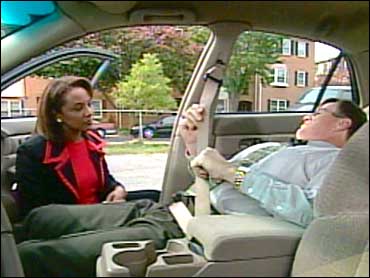 How many times have you been a passenger in a car and felt a little tired? So you put your seat all the way back and took a nap. Many people believe that riding in a reclined seat with the seatbelt on is perfectly safe. They couldn't be more wrong. The Early Show Contributor Debbye Turner reports.

"She described herself as joyful," says Vicki Pannebecker.

Kevin Pannebecker adds, "She called herself joyful Jamie. She was the noise of the house. And so she was very bright and very active and she was a lot of fun."

Kevin and Vicki Pannebecker of St. Louis, Mo., had two wonderful kids, son Drew and daughter Jamie. Then one afternoon, three years ago, Drew picked his sister up from school after soccer practice. But Jamie never made it home.

Kevin Pannebecker says, "Our son was driving the car. It was a beautiful day, dry. The roads were dry going about the speed limit and he simply nodded off and fell asleep."

Jamie was sitting in the passenger seat napping as she often did, with her seatbelt on and her seat fully reclined.

Kevin Pannebecker says, "We always telling the kids, 'hey if you're sleepy, recline the seat; take a nap, no problem.'"

Vicki Pannebecker adds, "I always thought that if the child comes forward, the shoulder harness will stop them from hitting that dashboard. That was what I thought, that's why I thought they were safe."

Moments after drew fell asleep the car collided with a utility pole at an intersection. The kids were only a few blocks from home.

Vicki Pannebecker recalls that day, "As I came around the curb I could see up ahead of me the little red car sitting on the side of the road."

Kevin Pannebecker notes, "When the car hit the utility pole, she was thrown forward. She came up. The seatbelt stopped her and started throwing her back. But at the same time, the seat back lever had given way and the seatback came up and it hit her in the back of the head. And it caused massive head trauma."

The Pannebeckers are convinced that if Jamie's seat hadn't been reclined, she'd be alive today.

If you read the owner's manual, it warns of riding in a car with the seat reclined. Most owners' manuals do. But the problem is, almost no one reads them.

Dr. Adrian Lund says, "People need to understand that if they recline the seats they basically disabled the belts." He oversees research at the Insurance Institute for Highway Safety.

He explains what happens in a serious frontal collision, if the seatbelt is on, but the seat is reclined, the person may slide under the belt and the lap belt over the abdomen may cause serious internal injuries.

Kevin Pannebecker says, "We had to learn it the hard way. What we're trying to do now is let people know about this and educate them. Because I swear that if you talk to a hundred people, 99 of them will have never heard about this as being a problem."

Since the accident the Pannebeckers have been on a campaign to raise public awareness. By speaking to any group, which will listen, like the Rotary Club and by passing out flyers at high schools, which advise to "Buckle up tight and sit upright."

Vicki Pannebecker says, "I would like to see a change in the seat design, that is my major goal. If we could stop the seats from reclining while the car is in motion that's what I want. If you pull over at a rest area and need to sleep fine, but not while your car's in motion."

Vicki and Kevin Pannebecker believe that trying to prevent similar tragedies is what their daughter would want them to do.

The Pannebecker created a foundation to raise public awareness of the danger of riding in a car with the seat fully reclined. For information on the SnowAngel Foundation, visit SnowAngel.org.