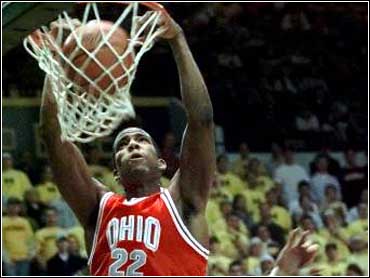 Reese, thriving in his role as sixth man, scored a career-high 25 points, and the Buckeyes rolled to their eighth straight win, 88-67 Sunday over Michigan on Sunday.

"I'm very, very happy with our team," O'Brien said. "This is one of our better efforts, offensively. The thing I'm most pleased with was how efficient we were on offense. I thought we did a good job of exploiting matchup problems.".

One of those matchups had Michigan freshman LaVell Blanchard guarding Reese, a senior.

"He's as big as Reese, but I think Reese had a little edge with his experience," O'Brien said.

Michigan coach Brian Ellerbe agreed that putting a freshman on Reese was asking a lot.

"We knew how good he is," Ellerbe said. "I think he's probably the most improved player in the league. It's just a tough matchup."

"We wanted to come out and jump on them early," Redd said. "Our defense was doing a nice job and that opened up a few shots for me."

The Wolverines (12-7, 3-5), who lost their fourth straight, finished with 16 turnovers and had the ball stolen nine times.

"Our defense came up big," said Scoonie Penn, who had 13 points and five assists for the Buckeyes. "That's been a priority for us all season. Our defense got our offense going."

The Wolverines were playing teir second straight game without freshman guard Jamal Crawford their leading scorer who was hit with a six-game suspension by the NCAA for his living arrangements while in high school.

"We're going to have to focus on playing without him," said freshman Kevin Gaines, who managed just six points filling in at the point for Crawford. "We miss him. He's our leading scorer and it puts a lot of responsibility on other guys to score."

O'Brien said Crawford's absence was a plus for the Buckeyes.

"It affects them greatly," O'Brien said. "We would be hard-pressed to take one of our leading scorers away. It was definitely to our advantage that he didn't play.

"For their sake, I hope it goes away. They've got a good program. I wish they could get down to playing, instead of dealing with this stuff."

The predominately freshmen Wolverines, coming off an 82-62 loss Tuesday night to Michigan State, never were in synch during the first 20 minutes. Just bringing the ball up the court became a chore for Michigan, despite only a moderate press by the Buckeyes.

The second half was more of the same.

Ohio State opened with successive 3-pointers by Brian Brown and Redd, triggering a 20-7 run. A soft hook shot by Ken Johnson gave the Buckeyes a 67-39 lead with 13:48 remaining.

Ellerbe said he liked the Buckeyes chances of making a repeat trip to the Final Four.

"They have a really good team with a lot of good parts, and they could go really far."