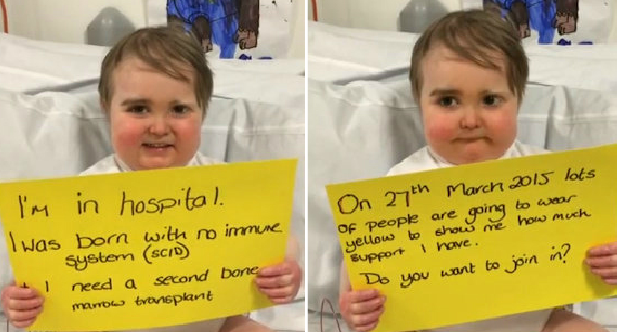 Seth Lane may have spent most of his life living in a "bubble," but he wants to be more than just a "bubble boy."

The five-year-old, born with severe combined immune deficiency, has been isolated in Great North Children's hospital in Newcastle, England, for the past few months awaiting a second bone marrow transplant.

While he waits, he is hoping to raise awareness for the rare disease by asking the Internet to wear yellow -- his favorite color.

Last week, Seth's family uploaded a YouTube video of their son holding up yellow signs to explain his situation.

"I'm in the hospital. I was born with no immune system (SCID)," a sign read. "I need a second bone marrow transplant."

Shortly after, he asked followers to #WearYellowForSeth on March 27.

"Lots of people are going to show me how much support I have," another sign read. "Do you want to join in?"

"You're in my heart and prayers, Seth!" one user commented on the video. "I'm wearing something yellow all of March in your honor, buddy!"

"He's so adorable and strong, I have it marked on my calendar to wear yellow on the 27th," another user agreed.

Seth's mother, Leanne, thanked everyone for support on a family blog, highlighting that the social media campaign is meant to "raise awareness and show Seth he is not alone in this."

Despite Seth's rough start to life, she says he continues to stay positive.

"He's asked to go home a couple of times this week, but accepts it when he's told he can't," she wrote in a blog post.

Luckily, Seth has found a donor -- his dad, Nik. But he still has a long road ahead of him.

"These next 4 months are crucial however, before the transplant takes place he must live without an immune system at all, but we're all staying positive especially thanks to everyone's kind words," Seth's mom posted on Facebook Thursday. "We are so excited to see the world blow up in yellow next friday!! Seth is going to LOVE IT!"