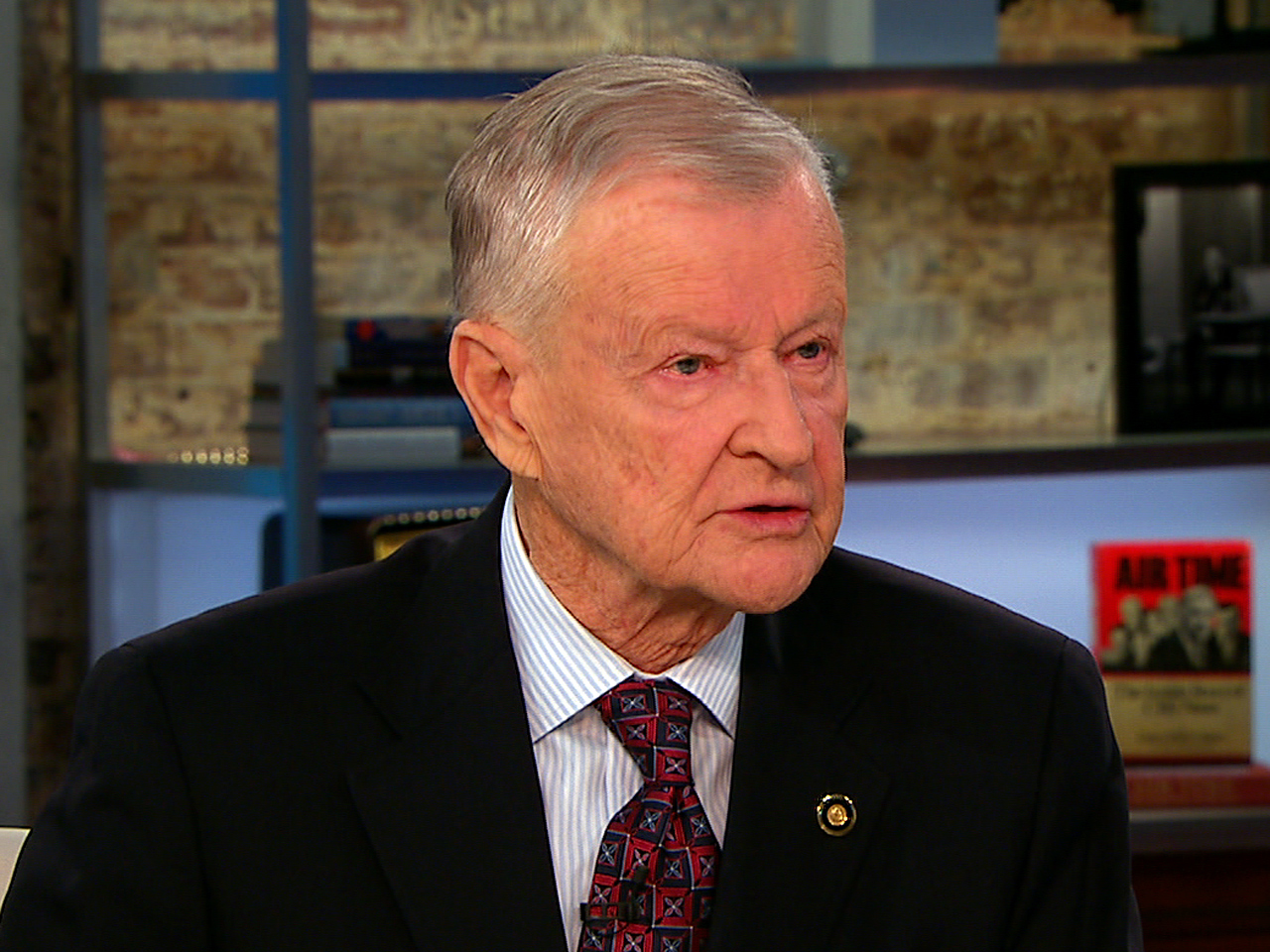 His new book, "Strategic Vision," offers his view of America's role in the world today, as powers shift from the west to the east.

A transcript of Charlie Rose's conversation with Brzezinski is below.

Charlie Rose: Tell me what the vision is that you see today and whether America is truly in decline in its power in the world.

Zbigniew Brzezinski: America is not itself in decline, in the sense that many aspects of America are changing positively, although we have some overwhelmingly complex issues to confront. The problem is that others are rising more rapidly than we.

Rose: The rise of the rest as they say.

Brzezinski: Exactly, there is a relative decline. That's how power changes, generally speaking, over time, so that is a challenge we have to face. But we have to recognize the fact that, unlike the recent past, we now live in the age of complexity -- of no power being capable of being dominant totally. So we have to have a foreign policy that competes and at the same time intelligently addresses the complex issues that we collectively confront.

Rose: Are you at odds with the president when he said in his State of the Union address that anybody that thinks America is in decline doesn't know what they're talking about?

Brzezinski: I think he was oversimplifying it. I can see how he, as president, can't say we're declining. But the fact of the matter is, there are many aspects of American life, of our sort of society, that is stagnating.

Rose: There is, some say, a decline in trust between the United States and China and that China got some of the American ire up when it exercised its veto in the (United Nations) Security Council about a resolution having to do with Syria.

Brzezinski: Well, yes. On both sides, there's growing resentments. On the Chinese side there is a little bit of what may be called triumphalism -- this sense of gratification that we have domestic problems and that, relative to us, they are rising and except to surpass us. On our side, there is some resentment of that, and also some inclination, in my judgment, perhaps misguided, to line up with some Asian powers that view China as a rival, as a threat, and to do so in a slightly clumsy way and therefore convince the Chinese that we're already ganging up on them. So we both have to be careful.

Rose: if you were the national security adviser today, what would you be advising president Obama to do about Syria?

Brzezinski: When he says "Assad must go," he'd better have a policy to force him out. So first off, don't make statements you cannot follow up on. Secondly, in this particular case, we have to follow the advice and work closely with the Turks and the Saudis. These are the two countries with biggest direct interest and with the possibility of dong something. And let's work with them and through them, but not take the lead and not certainly just verbally.

Rose: If the world is not able to stop the violence in Syria, will history judge it badly?

Brzezinski: That depends entirely on the outcome, and we don't know yet the outcome.

Rose: But it gets worse day-by-day.

Brzezinski: We have no way of predicting. Look at Libya. We were very happy to get rid of Qaddafi. Do we have democracy today in Libya? Do we have stability?

Rose: No, we have competing forces trying to take power.

Brzezinski: This could go on for a long time. In the case of Syria, it's complicated by the fact that it's two powers that are directly competing against each other within Syria -- but indirectly. Iran and Israel.

Rose: Let's move to Iran, will sanctions work? Both in terms of oil and financial transactions?

Brzezinski: They work already to an extent that they weaken Iran. They make domestic stability more difficult for the Iranian leadership to maintain. I don't think they will work in a kind of decisive fashion if our objective is to deprive the Iranians entirely of a nuclear program.

Brzezinski: We have North Korea already possessing nuclear weapons and delivery systems and we find that unacceptable. So the word unacceptable is again one of these words which means a lot and at the same time sometimes nothing.

Rose: So what would you advise the president if the Israeli prime minister comes to the Oval Office -- and the Israeli prime minister is coming to the Oval Office within the next month -- and said, "We have to go because we believe time is not on our side with respect with doing something about Iran. Not only are they developing the capability, but they're also developing an immunity from an attack."

Brzezinski: First of all, we deterred the Soviet Union, which was much more threatening than Iran ever will be. We deterred China. We are deterring North Korea. We can deter Iran. Second, we will proclaim, the United States, that any threat from Iran involving nuclear weapons or any other kinds of weapons against any country in the Middle East -- Arab or Israel -- will be viewed by the United States as a threat against the United States and respond accordingly.

Rose: But as you know, the problem is not just that Iran has a nuclear weapon, being able to contain them, it is that there will be nuclear proliferation in the Middle East...

Brzezinski: No, not at all.

Rose: That's what they say.

Brzezinski: I don't care what they say. You have to have much more than just the capacity to build nuclear weapons. You have to have delivery systems that are tried and tested and capable of delivering nuclear weapons. You have to have a lot of other systems to make it operative. I think the guarantee from the United States of complete protection, which has satisfied the Japanese and the Koreans, which has protected the Europeans under much more threatened conditions, can work in the Middle East. But we have to be firm and credible about it and we also have to say a conflict is not in our interest because we know if there's a conflict, we will be hit by the Iranians. Do you want another war in that part of the world? Do you want the price of oil to go up? Do you want our troops in Iraq and Afghanistan to be threatened? I don't understand how anyone can seriously argue that this is in the American interest.

Rose: To see Iran bombed and unleash their - whatever armaments they have against the Middle East or the United States.

Brzezinski: What evidence is there, except anxiety and fear, that they're going to do it?

Rose: So the sum total you believe about this is you can live with a nuclear Iran?

Brzezinski: Look: I don't want to live with a nuclear Iran. I would like to make it uncomfortable for them to seek it. I would like to promote internal change in Iran -- which is more likely if we don't fuse Iranian nationalism with Iranian fundamentalism.

Brzezinski: Yes, I think that is the fundamental problem. We can't have an intelligent foreign policy unless we have an intelligent public, because we're a democracy. Look at what happened in Iraq in 2003 -- the public basically supported it. We have set impossible goals for ourselves in Afghanistan. We had to go in because of what they did to us from there -- al Qaeda. But the goals we set were extreme. We don't have a public that really understands the world anymore and in the age of complexity, that problem becomes much more difficult.

Rose: This kind of dialogue and this kind of book will help the public to understand it and I thank you for coming here.