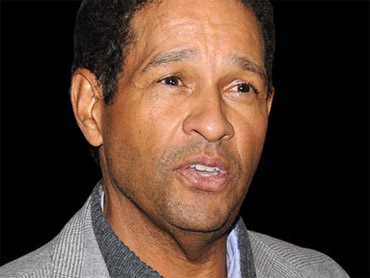 Bryant Gumbel shocked a television audience with the news that he's recovering from cancer surgery and treatment.

The former "Today" show anchor, 61, said a malignant tumor and part of his lung were removed two months ago. He revealed his condition to Kelly Ripa while subbing for Regis Philbin on Tuesday's edition of "Live With Regis and Kelly." (Philbin recently had hip replacement surgery.)

Even with the surgery, some aggressive cancer cells had escaped, "so I went through some treatment and it's done now," he said.

The tumor was not in Gumbel's lung, but next to it, said Sean Cassidy, a friend of Gumbel's and president of DKC, a New York public relations firm. Gumbel is not a smoker, he said.

Gumbel said he and his wife, Hilary Quinlan, had wanted to keep the news private. He said he had even kept his staff at the HBO sports newsmagazine "Real Sports" in the dark. HBO said Gumbel didn't miss an episode, taping shows on both Sept. 15 and Oct. 27.

Gumbel was host of "Today" for 15 years, ending in 1997, as the show became a ratings juggernaut. He worked first with Jane Pauley, briefly with Deborah Norville, then with Katie Couric. He moved to CBS for a prime-time newsmagazine. After that did poorly, he moved back to the mornings, hosting "The Early Show" from 1999-2002.

He's receded from the public eye since then, concentrating on "Real Sports," an Emmy-winning monthly magazine that takes a newsy look at sports issues.

Until he was called out by Ripa, there's some question about whether Gumbel's health news would still be under wraps. At the opening of Tuesday's show, Ripa told Gumbel that "you just made me almost faint."

The two had been talking backstage and Ripa mentioned that she wanted to dance with him to accompany a segment with a woman who dances for exercise. Gumbel demurred, and when Ripa pushed it, he said he was not allowed to dance. Then he told her the reason, she said.

Gumbel said he's meeting with his surgeon and oncologist next week and hopes to be cleared to play golf.