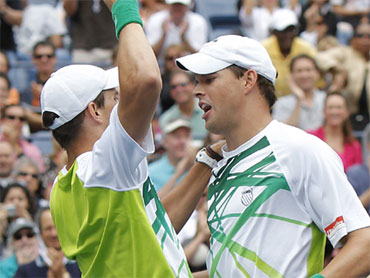 The Bryan brothers have won their ninth Grand Slam title, derailing the "Indo-Pak Express" doubles team of India's Rohan Bopanna and Pakistan's Aisam-Ul-Haq Qureshi in the men's doubles final at the U.S. Open.

Bob and Mike Bryan captured their third title at Flushing Meadows and 65th overall with a 7-6 (5), 7-6 (4) victory Friday in a match in which neither team broke serve.

Ambassadors from India and Pakistan, neighboring countries with a decades-long history of tension, attended the match at Arthur Ashe Stadium. Bopanna and Qureshi have been playing together since 2003, though the story of their attempt to promote peace through sports has gathered more steam in the past few months.

The Bryan brothers share more than the same mission and last name. They also share the same DNA. They're identical twins who share pretty much everything. Even in the strange parallel universe of identicals, the Bryan brothers are in a league of their own, "60 Minutes" correspondent Lesley Stahl reported earlier this year.

Bob and Mike celebrate each victory the same way: they jump up towards each other and bump their chests. With over 62 professional titles, their chests may be getting sore, but they're not complaining: they just broke the all-time record for tennis doubles.

Asked if they are the best doubles player in the world, both shrugged in sync, and Mike replied "We like to think we are."

In fact, they do everything in sync. You get mesmerized watching, like when they're about to return a shot in a game, or on the sidelines between games, even while practicing, near their home north of Los Angeles.

Said Mike: "We complement each other really well. I mean, if you put us together, we're one really good..."